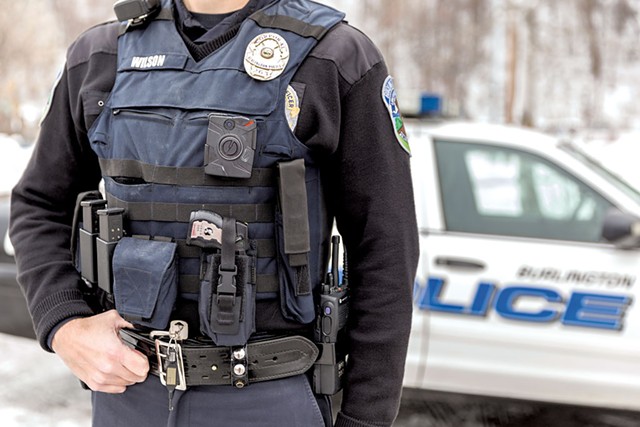 A Burlington police officer who allegedly committed perjury during a drug investigation has resigned, the Burlington Police Department announced Wednesday.

In a letter to the Burlington Police Department, Chittenden County State's Attorney Sarah George said that patrol officer Christopher Lopez had made "patently false" statements in a sworn affidavit in October and would no longer be used as a witness by local prosecutors.

Officials said that Lopez falsely claimed that he smelled marijuana to justify a vehicle search that led to an arrest. The damning evidence came from the officer's own body camera audio, on which he can allegedly be heard conceding to another officer that he had made up the story.

Lopez, who joined the Burlington Police Department in September 2014, was placed on paid leave earlier this month. He resigned on Monday in advance of a disciplinary hearing on Tuesday, police said. Burlington Police Chief Brandon del Pozo said he planned to fire Lopez at that hearing.

Now, authorities are investigating approximately 32 other drug cases involving Lopez that have similar "fact patterns" to see if there are other irregularities. Lopez could not immediately be reached for comment.

The perjury allegation stems from the October 25 arrest of Michael Mullen. Lopez claimed that he smelled marijuana coming from a vehicle that Mullen was in — a common justification police use to conduct searches.

In a sworn affidavit used to support a drug possession charge, Lopez said that he "observed what I know based on my knowledge, training and experience to be the odor of fresh marijuana emitting from" the vehicle.

But the footage from his body camera told a different story. The video shows Lopez try to deactivate his camera, and then ask fellow officer Nicholas Rienzi "you're off, right?" according to George's letter. Rienzi said his camera was off.

Lopez then said that he did not smell marijuana, but that he "could if he needs to but I don't like going that way if I can't back it up," George said in her letter.

"The Burlington Police Department is committed to the highest standards of integrity," del Pozo said in a prepared statement. "We have no tolerance for an act that, if proven, will erode the public's trust in the official statements of our police."

Based in part on that video, defense attorneys filed a motion to throw out the evidence gathered against Mullen, who was arrested on a drug charge. Authorities did not release further information on Mullen's arrest.

Del Pozo placed Lopez on administrative leave February 13, the same day a hearing in the case was scheduled in Chittenden Superior Court.

Lopez did not show up in court for that hearing. He initially told officials that the snowy weather prevented him from getting to court. But Lopez later told a prosecutor that he had "concerns" about going forward with the case. Lopez was not stranded by the weather, as he claimed — he was at the Burlington police station, a few blocks from the courthouse, George said in her letter.

Del Pozo asked the Vermont State Police and Chittenden County State's Attorney's Office to investigate Lopez after he found that there was "reasonable suspicion," to believe that Lopez committed perjury, according to a letter the department released.