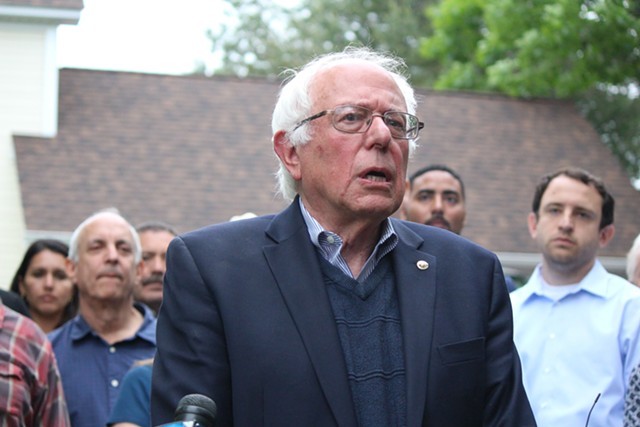 WeWillReplaceYou.org wants U.S. senators to “do everything [they] can to Resist Trump.” Organizers see Democratic efforts as “not nearly … enough,” and they vow to raise up primary challengers for any who fail to meet their expectations. The group promises that it “won’t accept anything less than full opposition” to President Trump’s administration.

By its own definition of “full opposition,” there is not a single member of the Democratic caucus who comes close to meeting its criteria. Not one. Including Sanders himself.

The group is run by activists from environmental, racial-equality and immigrants’ rights organizations. Two belonged to the Sanders orbit: Claire Sandberg, former digital organizing director for his presidential campaign, and Kenneth Pennington, a former Sanders Senate and campaign staffer — and former digital director for Our Revolution, Sanders’ post-campaign advocacy organization. At least three other organizers are connected to 350.org, the climate-change activist movement founded by Vermont environmentalist Bill McKibben.

“Our message to Democrats is pretty straightforward: Fight Trump or we’ll find someone who will,” Sandberg told NBC News. “Our goal is not [to] primary every single Democratic member of Congress. It’s to push Democrats who are there to do better.”

The group lists four criteria it believes should be met or exceeded by all Senate Democrats:

No member of the Senate — Sanders included — meets even one of those criteria, let alone all four.

According to Seven Days’ own confirmation scorecard, Sanders and Sen. Patrick Leahy (D-Vt.) have very similar records on Trump nominees. Out of a total 14 confirmation votes, Leahy has cast eight “no” votes; Sanders has cast 11.

A broader scorecard is being maintained by the political website FiveThirtyEight.com. It has tracked Senate votes on nominations, resolutions and other measures put forward by the Trump administration. That’s a total of 19 roll call votes. It found that Sanders voted “with Trump” 15.8 percent of the time; for Leahy, that figure is 31.6 percent. The percentage gap seems large, but the sample size is small; the two men have differed on a mere three votes out of 19.

To put those numbers in perspective, the senator with the lowest “Trump Score” is New York Democrat Kirsten Gillibrand at 10.5 percent; Sanders is in a five-way tie for second. The Democrat with the highest percentage is West Virginia’s Joe Manchin at 73.7 percent.

On WeWillReplaceYou’s other measures of resistance, Sanders has spoken out against the “Republican theft of a Supreme Court nomination,” but he has not declared outright opposition to Trump’s nominee, U.S. Appeals Court Judge Neil Gorsuch, and Sanders has held back from employing the magic word “filibuster.” He has participated in the confirmation process throughout, with no visible effort to bring congressional business “to a crawl.”

On impeachment, a handful of U.S. representatives have broached the subject, but we have found no evidence that Sanders has done so.

Overall, Sanders’ record on Resisting Trump is fairly typical of the Democratic caucus as a whole, except for a handful of red-state moderates. He speaks loudly but carries an average-sized stick.

It’s a long way ’til 2018, but if WeWillReplaceYou is true to its word, it would have to at least consider finding a progressive candidate to challenge the uncrowned king of American progressivism.

Sanders, who has not spoken to Seven Days since April 2015, did not respond to a request for comment, nor did spokesman Michael Briggs.