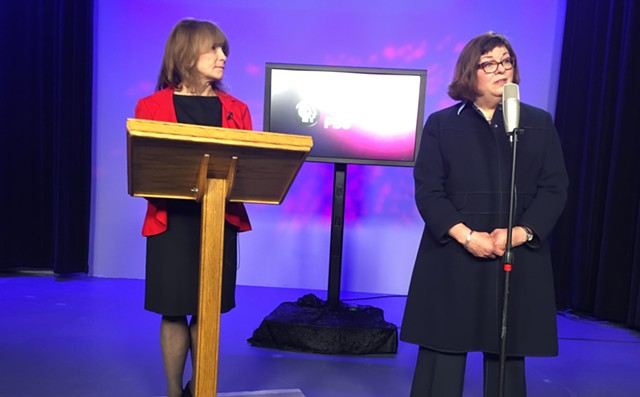 Vermont PBS announced Friday that it sold one of its four broadcast licenses for $56 million, money it plans to use to fund new programs and expand services for years to come.

The station said the loss of the license would not cause any reduction in over-the-air coverage. Instead, the windfall could transform the sleepy station into one of the most financially powerful media organizations in Vermont.

Vermont PBS, which airs syndicated shows such as "Sesame Street" and "NOVA," along with local productions "Outdoor Journal" and "Vermont This Week," says it plans to use the bulk of the money to provide expanded offerings in both over-the-air and digital platforms. It has no plans to use the money for "brick and mortar" improvements, Vermont PBS president Holly Groschner said during a press conference inside the station's Colchester studios.

"We are doubling down on the Vermontness of our broadcast," Groschner said. "We are hoping to be able to produce more Vermont content and [explore] more Vermont issues."

Vermont PBS has a $6 million annual budget. Roughly 16 percent comes from the Corporation for Public Broadcasting, the federally funded nonprofit that provides money to public media outlets across the country. Another four percent of the budget, around $270,000, comes from the state. Gov. Phil Scott proposed level funding that amount in his current budget proposal, Groschner said.

Both government funding sources have repeatedly come under threat in recent years.

President Donald Trump has reportedly considered privatizing the Corporation for Public Broadcasting, and Republicans for years have sought to slash its funding. State legislators have intermittently debated cutting support for Vermont PBS.

Groschner and Vermont PBS board chair Patricia Gabel said they were concerned that news of the windfall could prompt lawmakers, along with citizen contributors, to reduce their support for the station. Instead, they argue that the Federal Communications Commission money represents a one-time injection intended to "transform" the station, and not bolster its operating budget.

By installing additional repeaters and performing other engineering work to compensate for the loss of spectrum, Vermont PBS' footprint will be unchanged, Groschner said, and viewers should not experience any disruptions.

"We're at a time in our country and our state where it's particularly important to have nonpartisan, civic spaces where people can engage in civil discussion," Groschner said.

Television stations across the country have participated in the ongoing airwave auction, which is designed to meet the FCC's goals of reallocating airwave spectrum from broadcast to wireless carriers in an effort to facilitate the boom in mobile internet usage. (Airwaves are considered public property, managed by the federal government.)

Former FCC chair Tom Wheeler, who resigned on January 20, called the auctions a "once-in-a-lifetime" opportunity for the stations.

The purchaser of Vermont PBS's spectrum has not been announced. AT&T, Verizon and T-Mobile are among the wireless heavyweights sniffing around spectrum auctions around the country.

Bidders have been forecast to spend as much as $60 billion gobbling up spectrum.

Groschner, who was the former general counsel for the Vermont Telecommunications Authority, said Vermont PBS' spectrum is particularly lucrative because it potentially reaches into the Boston market. Vermont PBS said it does not anticipate selling any of its three remaining licenses. Doing so, Groschner said, would reduce the station's footprint.

The station expects to receive the proceeds late this year. It said it will embark on a strategic planning process, including public feedback, before launching new plans. It could hire additional staff to handle the funds.