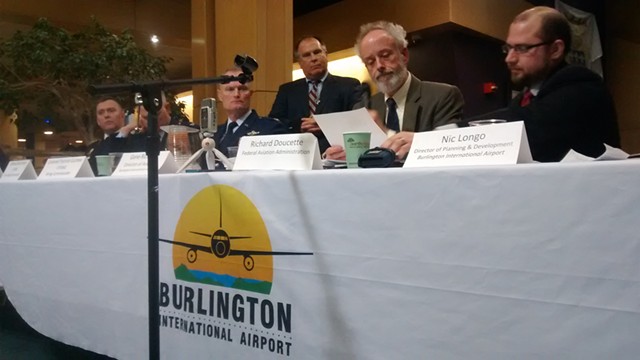 The officials hoped the question-and-answer session would relieve rising tensions as a controversial home buyout program proceeds around the airport in South Burlington. In September, the airport announced 39 new home buyouts. More than 100 homes have been bought since the program began in 1997.

Much of the noise comes from F-16 fighter jets based at the airport. The din is expected to increase with the arrival of louder F-35s sometime in 2019 or 2020.

Critics argue that the buyouts reduce affordable housing stock and raise property taxes. Members of the South Burlington City Council have complained about a lack of communication from airport officials concerning the FAA's plans.

Nearly 70 people showed up to the meeting on the airport's mezzanine to hear what the officials had to say.

Richard Doucette, an environmental protection specialist for the FAA's New England region, offered business cards to attendees and volunteered to sit down with council members. "I have a phone that works pretty well; you're welcome to call me anytime," he said.

The airport is currently finishing home buyouts, and will begin implementing a program to insulate other homes from noise, explained Nic Longo, director of planning and development for the airport. The airport will continue to host public meetings as the process continues, he said.

In submitted written questions, some residents expressed worry about the effects of noise on Chamberlin Elementary School. Doucette said the noise isn't dangerous, though he noted that the FAA continues to research the subject.

Others wondered whether the airport will create a new noise map for the F-35s. The FAA is considering the idea, Doucette said, though the updated map wouldn't be complete until at least 2018.

"The government does nothing quickly," Doucette said wryly.

Doucette, though, told the crowd that there's little he can change. "In the words of a famous football coach, 'It is what it is,'" he said.

Longo and director of aviation Gene Richards urged public participation. "It's your neighborhood, we want to know what you're thinking," Richards said. Following the meeting, airport officials promised to transcribe the submitted questions and answers and post them online for the public to see, said Longo.