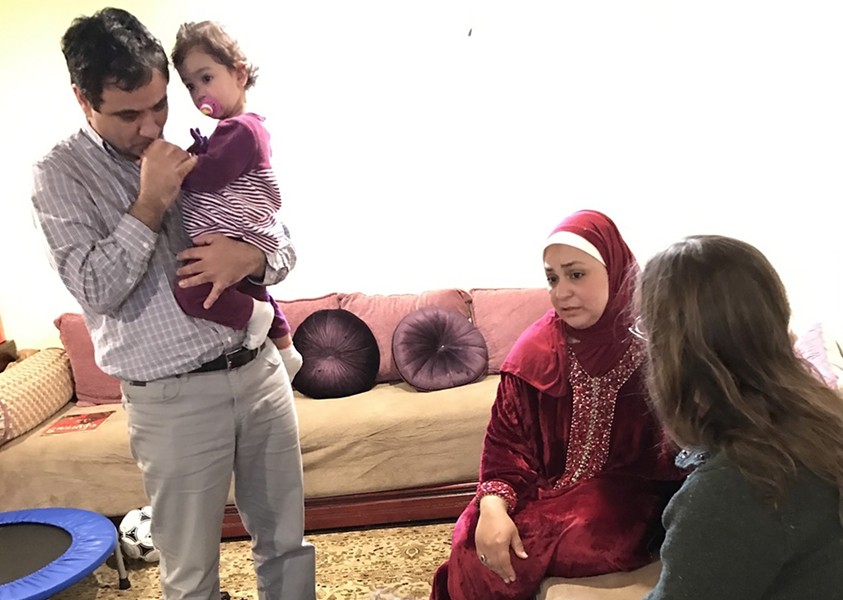 Richmond neurologist Andy Solomon and his family had participated in marches in Washington, D.C. and Montpelier, called their elected officials, and tried to find as many ways as possible in recent weeks to protest President Donald Trump's administration.

They were contemplating what to do next when Solomon saw a report from the Canadian Broadcasting Corporation that left him aghast.

Fadwa Alaoui, a Moroccan-born Canadian citizen who is Muslim, her two children and an adult cousin were turned away at the border last week as they tried to go on a shopping trip to Burlington. Alaoui's parents live in Chicago, and she'd visited the U.S. on several occasions previously. But American border guards inspected her cellphone, quizzed her about Trump and her faith — and then wouldn't allow her in the country after waiting four hours to enter Highgate Springs, she told the CBC.

"He said, 'Do you practice? Which mosque do you go to?" she told the news outlet. "What is the name of the imam? How often do you go to the mosque? What kind of discussions do you hear in the mosque? Does the imam talk to you directly?'"

Solomon, who works at the University of Vermont Medical Center, has lived in Vermont for six years. During that time, he said he's been moved by the ethos of neighbors helping neighbors. He figured that same fellowship should extend across the Canadian border.

So he reached out to the CBC and eventually made contact with Alaoui and her family.

Then, on Saturday, Solomon, his wife, Rebecca Starks, and their two young children piled into their car and drove up to Alaoui's home in Brossard, a Montréal suburb. They brought toys for Alaoui's children but didn't expect to stay long. They didn't want to intrude.

The visit lasted about six hours. The families drank tea and ate Moroccan couscous; the children played together. The CBC stopped in to document the families meeting.

"They felt like old friends by the end of it," Solomon said. "It was just regular people talking. We were there to say, 'Hi, we're from Vermont, and we're sorry about what happened and we wanted you to know that.' That seemed more meaningful than trying to create a movement or something."

Alaoui's saga made an impact on other Vermonters, too. Montpelier city clerk John Odum offered to host the family for a visit. And another Vermonter arrived at Alaoui's house as Solomon and his family prepared to leave.

Solomon said he plans to stay in touch and hopes to see the family again.

A U.S. Customs and Border Protection spokeswoman declined to comment on the case, citing privacy regulations. But in a prepared statement, the agency said it denies entry to .06 percent of people who arrive at points of entry every day.

"No one is allowed to enter the United States until he or she has established to the examining officer's satisfaction that he or she is a citizen of the United States or is an alien who has overcome all grounds for inadmissibility," the agency said. "In all cases the applicant bears the burden of proof of admissibility. Inadmissibility is the main tool we use to keep people who might endanger U.S. safety, security, or welfare from entering our country."

Burlington immigration attorney Leslie Holman said customs officials should not be making decisions about admissibility based on a traveler's political or religious leanings.

"Under no circumstances is that normal," Holman said. "That's not a ground of admissibility. The questions may be designed to lead to something that might provide information, but that's so broad. And something like your political affiliation or do you support who is running the country — that in no way is a proper question."