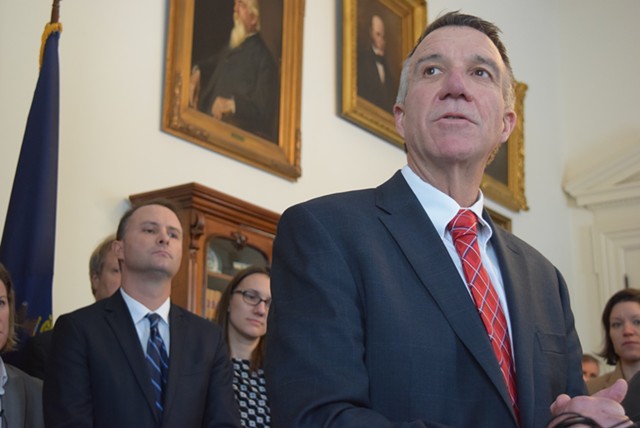 Vermont’s governor, legislative leaders and attorney general are all singing the same tune: The state will not help the federal government carry out a new immigration order. Nor will it aid the feds in creating any kind of registries about Vermonters.

That’s the gist of a bill unveiled Thursday that both the House and Senate will start considering Friday.

It comes in response to executive orders from President Donald Trump. The orders are so wide-ranging that Vermont officials don’t know what to anticipate.

“Vermont will not be complacent, nor will Vermont be complicit in this federal overreach,” said Attorney General T.J. Donovan.

The legislation would ensure that only Gov. Phil Scott could enter into agreements that would allow Vermont law enforcement to assist the federal government. Scott said Thursday he doesn’t anticipate any circumstance under which he would do that.

Scott said the bill is particularly meant to address a portion of Trump’s executive order on immigration that would empower state and local law enforcement agencies to “perform the functions of an immigration officer in the interior of the United States.”

Its other goal is more preemptive, Donovan said — to avoid putting Vermont in the position of collecting information for the federal government about its residents, such as their religious affiliations, that could potentially be used to put together a registry of all Muslims in Vermont. “The executive orders have caused great anxiety and fear,” Donovan said.

Scott, a Republican who reached agreement on the legislation with other state leaders who are Democrats, said he’s gotten some backlash locally for his response. Some of those people have misconstrued what the legislation would do, he said.

Scott said he has told some of those critics that they might look at federal intrusion on state rights differently under another president. A future president might, for example, target the Second Amendment of the Constitution, which protects the right to bear arms, he warned.

There was a political dance over who would put their names to the legislation, however. In the House, Democratic and Progressive caucus leaders agreed to be sponsors, but House Republican leader Don Turner (R-Milton) wouldn’t go along. Rep. Heidi Scheuermann (R-Stowe), a moderate, is instead the Republican sponsor.

“When I go out on the street, people say, ‘Oh, you’re making a sanctuary state,’” Turner said. “I want to make sure I don’t wind up in support of a bill until it gets through the process so I can read it … Not everybody up here is a 100 percent behind everything that is proposed.”

Scott said he has purposely steered clear of declaring Vermont a “sanctuary” state, a term used for localities that refuse to work with the federal government to enforce immigration laws. Trump has threatened to withhold federal funding from sanctuary communities.

“There is no legal definition,” Donovan said of sanctuaries. “I don’t think it’s advantageous to label a town or state as sanctuary.”

On Wednesday, Canadian media reported that a Muslim woman with a Canadian passport was stopped at the Highgate Springs border crossing while heading to Burlington to shop. Scott said he is inquiring with federal authorities about the incident, but has not yet gotten details about what happened. The governor said he has not heard of other similar incidents.