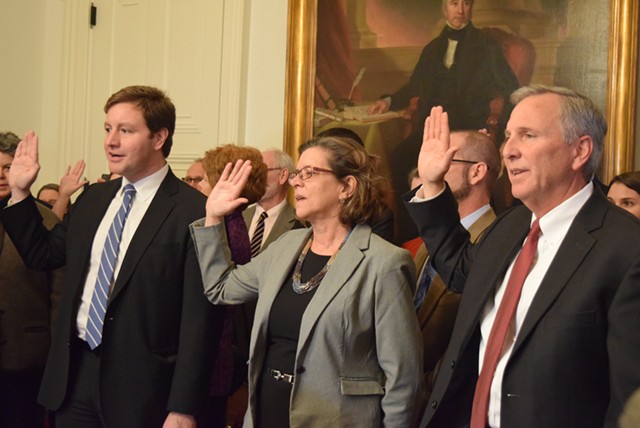 Gov. Phil Scott’s administration came out Thursday firmly against a marijuana legalization bill that has sparked interest in the House.

“We,” as it turns out, extends beyond the state police to the governor and his administration.

“We speak with one voice,” said Public Safety Commissioner Tom Anderson. “That’s what the governor stands for also.”

Hall's comments represent a shift from Scott's own. The newly elected Republican governor has not embraced legalization, but he hasn’t explicitly come out against it either.

Hall was more explicit. He told the House Judiciary Committee that the legalization proposal, based on a law in Washington, D.C., “raises serious public safety concerns” and is largely “unenforceable.”

The committee is considering a bill that would legalize possession of up to two ounces of harvested marijuana, two mature plants and seven immature plants. The bill would not legalize sale or public use of the drug.

"Two ounces of marijuana, we feel, is a significant quantity," Hall said. "I think it's a significant jump when you go from decriminalization to legalization."

Hall said that if possession of that much marijuana is legal, police will have a harder time arresting dealers. An adult w

aiting in a high school parking lot with two ounces divvied up into smaller portions might be trying to sell that pot to teens, he said, but police won’t be able to simply arrest the person for possession.

“There’s not much I can do, short of witnessing an actual sale, which is not easy to do,” Hall said.

It's no surprise that state police oppose legalization. But there’s a different dynamic to the debate this year under the administration of Scott, a Republican, than there was last year under Democratic governor Peter Shumlin.

Anderson said that sort of split wouldn’t occur in the Scott administration. “There won’t be different parts of DPS speaking on different sides of a bill,” Anderson said. “We will speak with one voice and it will generally be whatever the governor’s view is.”

The committee’s reaction to Hall’s testimony signaled another change in the debate this year.

When Hall said that legalization would make it harder to keep marijuana out of kids’ hands, committee chair Maxine Grad (D-Moretown) pushed back, arguing that that was not true of alcohol.

When Hall cited a Rocky Mountain High Intensity Drug Trafficking Area report on how legalization is playing out in Colorado, Grad openly scoffed. That report’s flaws have been widely noted, she said.

A year ago, Grad was skeptical of legalization. This year, she's sponsoring the legalization bill, minus the Colorado-style taxed and regulated pot shops and lounges.

She said after the meeting that her committee will discuss whether to change the amount of marijuana that would be legal from two ounces to something less.

Scott spokeswoman Rebecca Kelley said Friday that while the governor, Public Safety and state police are aligned on the issue, Scott is willing to review any legalization bill the legislature sends him.

“Questions to be answered include a sufficient ability to measure impairment for highway safety, and better understanding impacts on public health,” she said.