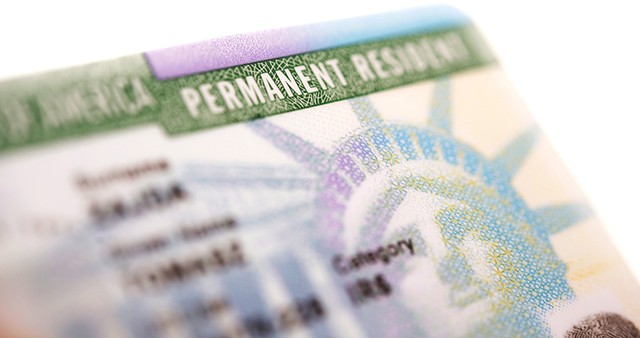 Some local green card holders may have recently received disconcerting mail from town clerks in Vermont. Specifically, they've been sent notifications saying that they are registered to vote.

Why would that be cause for alarm for green card holders? For one thing, it's illegal for non-citizens to vote. And doing so could lead to deportation.

At a time of heightened anxiety in immigrant and non-citizen communities — not to mention President Donald Trump's obsession with voter fraud — the mystery mailings inspired some justifiable conspiracy theorizing on social media. Is this a plot by Trump agents looking to set up non-Americans for voter fraud?

On Friday, a Facebook post describing the situation of a green card holder referred to as "Luke" went semi-viral, locally and beyond. A search of the post's wording revealed dozens and dozens of reposts, including many from well outside Vermont. Seven Days attempted to track Luke down. We couldn't.

The letter identified the Department of Motor Vehicles as the agency that registered him on January 23 — though he hadn't visited the DMV since 2013, the post said. Aware that he cannot legally vote in the United States, Luke got it straightened out, per the post, but the question remained: Had others had a similar experience?

The answer is yes.

Chris Winters, Vermont's deputy secretary of state, responded to one of the Facebook posts on Friday and suggested that Luke's story was valid and had happened to others. He explained that the Secretary of State's Office was aware of the issue and attributed it to a "data glitch" at the DMV related to the state's Automatic Voter Registration program, which was rolled out as a pilot program a few weeks ago.

A couple of hours later, Secretary of State Jim Condos made a statement via press release confirming Winters' explanation.

According to the release, the DMV's data transfer process for the AVR program was "over-inclusive" for a period of 18 days between January 3 and January 20. The technology sent more information than necessary to the Secretary of State's Office. This included info for individuals who are ineligible to vote.

Condos' office stopped the transfer on January 20 after discovering the glitch. The DMV, meanwhile, has identified the problem and is working to gauge the full scope of the records sent in error, Condos said. An update on those findings is expected next week.

Since there was no election during the DMV snafu, Condos noted that no ineligible votes have been cast. He adds that eligible voters will remain eligible and those added to the system in error will be removed.

Perhaps most importantly, he wrote, "Those who were mistakenly registered through this coding error have not violated the law and will be purged from the system."

Welcome news, we imagine, for "Luke" — and others who unwittingly found themselves in the same situation.