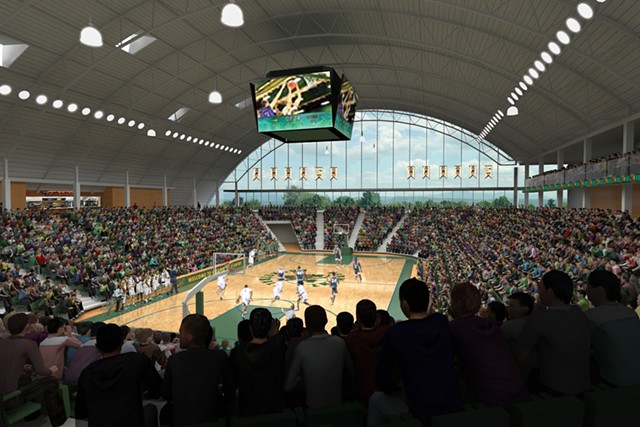 The University of Vermont will move forward with plans for an $80 million overhaul of campus athletic facilities — including a new basketball stadium, events center and renovated hockey arena.

At a board of trustees meeting on Friday, UVM representatives unveiled the proposed multipurpose center, which would be five times larger than the existing facilities. The plan includes a complete reconstruction of Patrick Gymnasium, as well as additions and renovations to the Gutterson Fieldhouse hockey arena. The completed 86,000-square-foot complex would include a fitness center, social space for students, academic classrooms, and practice and game facilities.
The plan comes after the university for at least a year entertained siting proposals from local municipalities. UVM considered using the Memorial Auditorium lot for an arena in downtown Burlington and also investigated the space where University Mall currently stands in South Burlington.

But this proposal fits the bill, said Tom Gustafson, vice president of university relations and administration. He called it the “right size, scope, practicality and value” to finally get the long-awaited project done.

“I ... wish them good fortune with their plans,” Weinberger wrote in a news release. “As with many university initiatives, UVM’s success with this important undertaking will be the city’s success as well.”

After conducting surveys with students, fans and alumni, UVM found that spectators and students wanted games to remain on campus, according to Gustafson. They found a “strong emotional connection” to the hockey barn, affectionately known as “the Gut.”

After the initial presentation Friday, two different UVM board of trustees committees approved the initial concept, recommended using money to move forward with conceptual design work, and called for a cost estimate and funding plan. The full board of trustees is scheduled to vote on the issues Saturday morning.

If all goes according to schedule, the facility would be completed by the middle of 2022.

“I see an institutional will to make this happen that hasn’t existed before,” said Jeff Schulman, the UVM athletic director.

Since last fall, the university has worked with the Boston-based CannonDesign architecture firm to create a proposal. Renovation talks have taken place “for decades,” principal architect Colleen McKenna told the board. Patrick Gym was built in 1963 and McKenna called the labyrinthine facility “hard to navigate” and “uninviting.”

“The majority of spaces are just bursting at the seams,” McKenna added, noting that the university is forced to rent out space downtown for club sports teams to practice.

The design process is in the initial stage and could take 18 months for completion. Then comes an estimated three years of construction, taking place primarily in the summer when fewer students are on campus. According to Schulman, the university hopes to raise $35 million from donors and alumni, though it’ll cost approximately $80 million to complete the venue.

Schulman said the upgrades will make the athletic program more competitive and attract athletes and non-athletes alike. Facilities serves as a “sign of how committed a school is to their program,” he said. The existing arena “doesn’t project the image” the school needs to draw top recruits, he added.

“I couldn’t be more excited ... to finally see this come to the fruition,” Bernhardt said.