Rebels No More: SBHS Student Isaiah Hines on the End of the Rebels Nickname | Off Message

Rebels No More: SBHS Student Isaiah Hines on the End of the Rebels Nickname 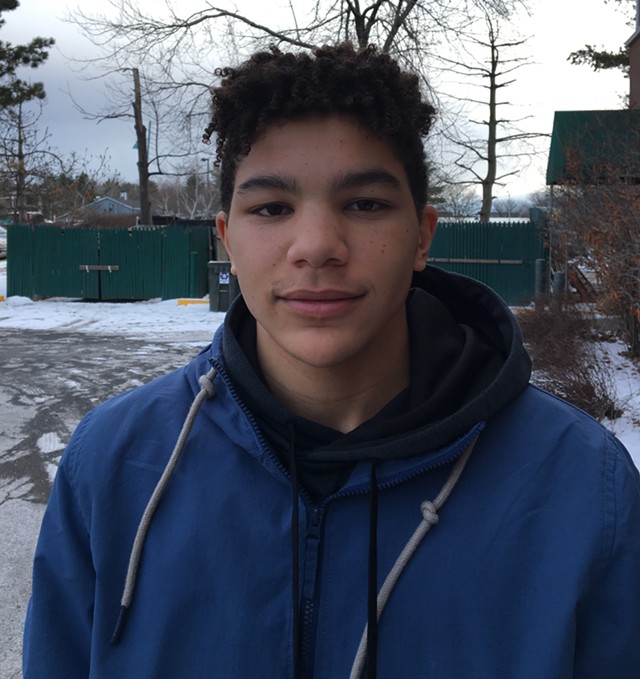 On Wednesday, the South Burlington School Board voted to abandon the high school's contentious nickname, the Rebels. The decision came after more than a year of heated community debate centered on the racially insensitive implications of the nickname due to its roots in the Confederate South. While school officials have long acknowledged those origins, fully addressing them has been a decades-long process.

SBHS was founded in 1961. But as Seven Days has previously reported, it was only about 20 years ago that the school retired its Captain Rebel mascot — which was a caricature of a Confederate colonel. It also stopped flying Confederate flags and playing "Dixie" at sporting events. What's the only thing stranger than a public school deep in Union territory adopting Confederate imagery? Perhaps that the nickname Rebels lived on even amid increasing public concern in recent years.

In August 2015, Confederate symbolism was at the forefront of a national debate. After Dylann Roof's racially motivated murder of nine black people at a Charleston, S.C., church, the Confederate flag was removed from the grounds of the South Carolina statehouse. In Vermont, heightened sensitivity spurred the SBHS school board to revisit the Rebel nickname. And they did. That October, the board voted unanimously to keep it.

That setback didn't stop Isaiah Hines. In fact, it spurred him to action. The 17-year-old SBHS senior has led the push to drop the nickname ever since. He joined the school board as student representative last year and is the founder of a student group, the Student Diversity Union, that has advocated for the name change within the SBHS student body. On Wednesday, Hines, the SDU and those with a grasp of American history scored a significant, if belated, victory.

7D caught up with Hines Thursday at a South Burlington café.

SEVEN DAYS: How did you get involved with the effort to change the Rebels nickname?
ISAIAH HINES: When the debate first started in August 2015, I wasn't very involved. I didn't even go to the meeting where they decided [to keep the nickname]. I was genuinely too intimidated to voice my opinion, because there was such strong student support for keeping the name. And I guess you could say there still is. But it didn't feel like an environment in which I could express that opinion. Because of that, I created [the Student Diversity Union]. It's a safe space for students to discuss race, racial identity and racism.

In January [2016] I applied to be on the school board, because [the nickname] was still a problem for me. And it was the only way I could see to change it. I figured it would be a lot easier to change it from the inside.

In my second or third meeting, I asked what was being done about it. Because when they made the initial decision they had promised a few things along with it. It wasn't just, keep the name and ignore it. At least that's what they said. But that is what they ended up doing.

It wasn't my intent to do so, but I ended up calling them out on it. I was disappointed by what I saw. Basically, they had done nothing of what they said they were going to do. The only thing they did was to create a Diversity Education Committee, which is great. But what does it really do?

SD: The school board voted unanimously to keep the nickname in 2015. At what point did you get a sense that opinion had shifted enough to where changing it might be a realistic possibility?
IH: We held an event in the spring [of 2016] and Mr. [Martin] LaLonde, who is also on the board, said to me that he was not done with the debate over the name. And that let me know that there was still a chance. Because my friends and I, we hadn't forgotten about it. We still felt strongly about it.

SD: There are strong feelings on both sides of the debate. Have you personally experienced pushback from fellow students?
IH: Absolutely. I think for a long period of time, the majority of students were strongly against changing the name. But the interesting thing was that most of them didn't really know what the problem was. They hadn't paid close enough attention during the debate and hadn't done any research. They thought, I like the name, let's keep it. #keeptherebelname was trending on Twitter in the area. They didn't really expose themselves to an alternate view.

For a lot of people, it was tied to the sports teams, because that's where you really see the Rebels all the time. But I'm an athlete and that was part of the reason I wanted to change it. Every day at practice or at a game, it was "One, two, three … go Rebels!" It was a constant reminder that this is a reference to the Confederacy. And I couldn't stop thinking about that.

SD: So when that rally cry would go up, would you take part?
IH: Usually I would join them, but not say it.

SD: Do you think people simply weren't aware of the Confederate roots of the Rebel name?
IH: Yes. I've been disappointed with the school board's efforts to educate the community. Because almost no one knows that history unless they have followed the debate or have done research on their own.

[The school board] sent out a survey polling students and talking to the community. Those results didn't mean as much to me because I knew so many students didn't really know what the issue was. And I know that from talking to students that explaining that history does pretty easily sway people. If you don't know, then, of course: Why would you change it?

And I know that from talking to students that explaining that history does pretty easily sway people. If you don't know, then, of course: Why would you change it? tweet this
SD: A lot of folks seem to think the name is a reference to the Green Mountain Boys.
IH: That's a really common belief.

SD: How did you raise that awareness of the nickname's Confederate origins?
IH: Social media was a big thing. But the Student Diversity Union was my biggest platform, besides the school board. We host community and school events all the time. We have meetings. We have a pretty big group now — like, 40 students. So we kept the discussion alive within that group and we were able to keep it, to some degree, in the school's eye.

SD: What was your reaction when the decision was announced?
IH: My first reaction was happiness that they finally made the right decision. But it was a little bittersweet because they had pushed it off for so long. Just the fact that they made the initial decision, despite the concerns from students and people in community — I wasn't the first person to speak out and they ignored those first people. So yeah, it was bittersweet.