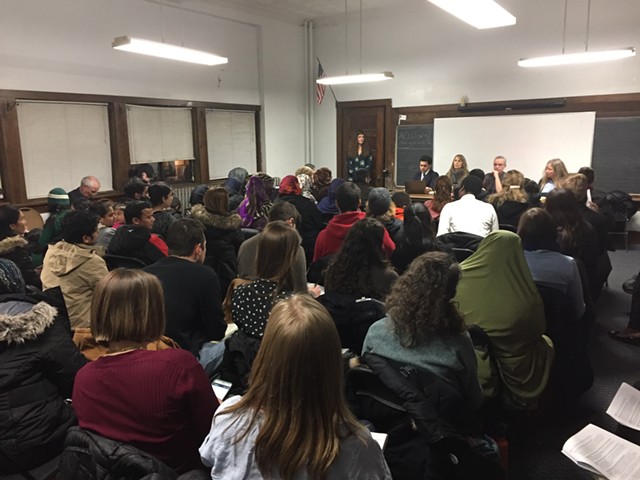 "Will we be allowed back in?"

That question was on the minds of more than 100 people — mostly from refugee communities — who attended an information session on immigration rights Thursday night at the Association of Africans Living in Vermont in Burlington's Old North End. They wondered what would happen if they leave the country.

Vermont Legal Aid and the Burlington Parks, Recreation and Waterfront Department organized the session to address concerns from the community after President Donald Trump signed an executive order that closed the U.S. to refugees and nationals from Iran, Iraq, Libya, Somalia, Sudan, Syria and Yemen.

Arthur C. Edersheim and Erin Jacobsen, attorneys from the South Royalton Legal Clinic; Michele Jenness, legal services coordinator at the AALV; and Jay Diaz, a staff attorney with the Vermont chapter of the American Civil Liberties Union, each gave a short presentation on the travel and immigration ramifications of the executive order.

Representatives of Vermont's congressional delegation also affirmed their commitment to helping those who are affected by the changes. Many attendees took down the contact information of the attorneys and delegates.

A lively hourlong question-and-answer session ensued. A Muslim man said he was worried he would not be granted citizenship because of his religion. A Somali-born parent wondered if her U.S-born children would be stripped of their citizenship. A Bhutanese woman said she wants to bring her husband, who's a Nepali citizen, to Vermont.

Despite the attorneys' repeated assurances that U.S. green card holders will not be affected by the executive order, many Bhutanese attendees, including those who have already acquired U.S. citizenship, were worried they would be barred entry into the U.S. after visiting their relatives in Nepal.

As a safety precaution, Diaz advised green card holders whose country of origin is one of the seven countries to inform family members or friends of their travel plans, in hopes they can get them assistance if they're detained.