Montpeculiar: On Bill Markup Day, We Ate Cake | Off Message There's a legislative process called "bill markup" which is incredibly important for making good law, and is also the Boston Marathon of legislative tedium.

After all that, when the committee is almost ready to vote on the bill, it has a markup session. This is a process of going through the bill line-by-line, raising potential issues, discussing, debating, dithering, and finalizing the language in the bill. Which they've gotta do because, after all, this thing might become law, and they can't afford to overlook mistakes or unintended consequences. Still, it tries the patience of one and all.

On Wednesday, the Senate Government Operations Committee was scheduled to do markup on S.8, the ethics reform bill. Thirty-two pages of legalese.

Committee chair Sen. Jeanette White (D-Windham) is no dummy. She knew it was going to be a long, tedious afternoon. So she brought cake.

Which she placed dead center on the committee table.

"Did you get that at La Brioche?" inquired Sen. Alison Clarkson (D-Windsor), name-dropping the popular Montpelier bakery.

Amazing what supermarkets are turning out these days.

As the committee trudged through the arcana of S.8, the cake sat there, enticing the eye, watering the mouth as it wafted out the gentle fragrance of chocolate.

Most of the discussion was both trivial and congenial, but as 3 p.m. approached, it became clear the committee was deeply divided on one question.

The ethics bill includes a pay-to-play provision, designed to prevent political donors from landing no-bid, single-source contracts. Language applying to businesses was duly hammered out. Basically, a for-profit entity or individual who makes a donation to a candidate for governor is barred from receiving single-source contracts from the state for one year. The idea is to avoid "pay-to-play" — giving money in the hope of landing state contracts.

The committee then turned to a section covering nonprofit organizations. That "pay-to-play" provision didn't apply to them, and Sens. Claire Ayer (D-Addison) and Brian Collamore (R-Rutland) wondered why.

Clarkson argued that nonprofits don't have the same potential for "pecuniary gain." Ayer and Collamore argued that while nonprofits may lack the profit motive, they clearly benefit from getting state contracts. And a lot of nonprofits get state funding. Hospitals and designated agencies, for instance. If you run a nonprofit or work for one, and you don't get that state contract, your job could be on the line.

The debate grew heated, and it looked like Ayer and Collamore had the support of Sen. Chris Pearson (P/D-Chittenden). That would be a majority of the five-member panel. 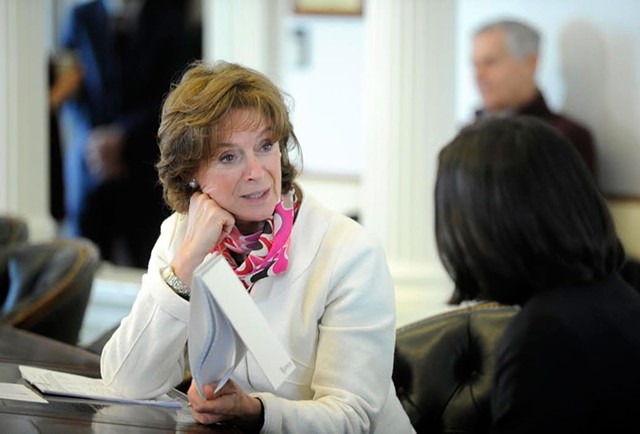 That's when White pulled a pair of master strokes. First, she announced that as soon as the point was settled, there would be a five-minute recess and cake would be served.

Next, she took a strategically-ordered straw poll of the committee. She began with herself and Clarkson, two votes against applying the pay-to-play ban to nonprofits. Then she took Collamore's vote in favor.

And then she put the question to Ayer.

If Ayer had voted with Collamore, it seemed likely that Pearson would follow suit. The debate would go on. The cake would remain untouched.

Full disclosure: slices of cake were offered to everyone in the room, including two reporters — yours truly and Mark Johnson of VTDigger.org. We both accepted.

And it tasted even better than it looked. Deeeeeee-lish.