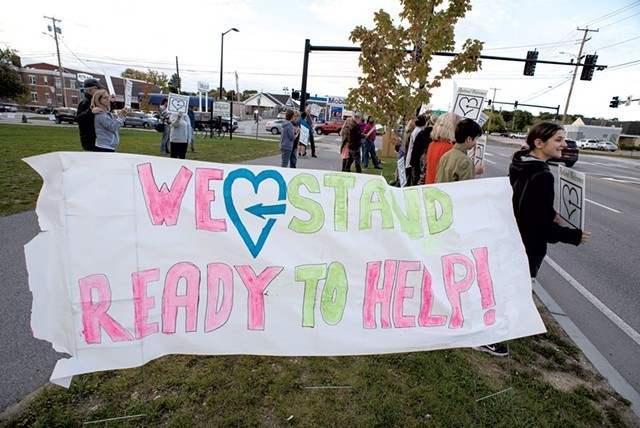 An executive order expected to be signed Wednesday by President Donald Trump could halt the flow of Syrian refugees into Rutland — just a week after the first family arrived.

"It's very alarming," said Stacie Blake, the director of government and community relations at the U.S. Committee for Refugees and Immigrants.

"We don't have any concrete information about his intention," she said of Trump.

The federal decree would impose a temporary ban on most refugees and would suspend U.S. visas issued to citizens of seven Middle Eastern and African countries, including Syria, according to Reuters.

An estimated 100 Syrian refugees were scheduled to resettle this year in Rutland. The decision, and subsequent preparation to welcome the new neighbors, caused considerable angst among some city residents.

The Obama administration announced in September that the U.S. would accept 110,000 refugees in 2016-2017 — a 57 percent increase over fiscal year 2015. It came as the humanitarian crisis worsened in Syria and the number of people fleeing the Islamic State rose dramatically. This year's planned boost proved "U.S leadership with regard to refugee protection," Blake said. Trump's decision to stop or slow the program is "very concerning" and it's unclear "how other countries will interpret that," she said.

The order is also expected to suspend visas issued to citizens of Iraq, Iran, Libya, Somalia, Sudan and Yemen. That means it will likely affect individuals who worked with U.S forces in the Middle East, Blake noted. Afghan and Iraqi translators or interpreters who worked directly with U.S. Armed Forces or at the U.S. embassies in Baghdad and Kabul are eligible to apply for a visa under a special immigrant visa program. Up to 50 of those visas can be issued annually.

"We made a promise to them that they will be protected," Blake said.

Such a ban is within the president's purview, according to University of Vermont migration scholar Pablo Bose.

"I don't know if Rutland will continue to be a resettlement site," he said. "For example, if they hold up the visa approval, I could definitely see the possibility of them not approving the rest of the 100 people."

Meanwhile, Rutland Welcomes, a local group working to help Syrians resettle in Rutland, is encouraging its members to contact the White House and oppose the executive order. A petition asking Trump to allow resettlement to continue had more than 11,000 signatures by Wednesday afternoon.