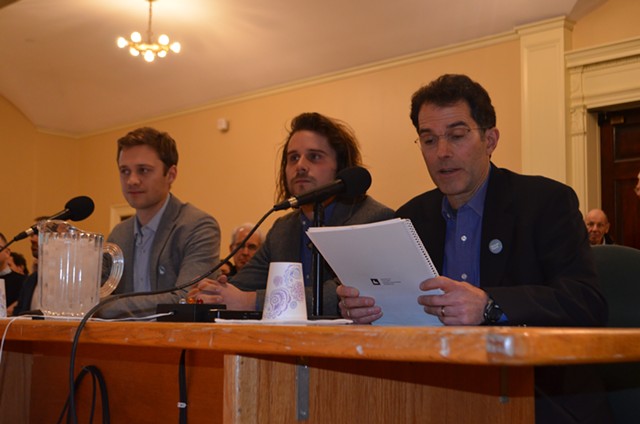 A team looking to redevelop the Moran Plant presented an updated proposal on Monday at a Burlington City Council meeting. It could finally mean movement on a project that has been plagued by untenable proposals and years of inertia.

The majority of business owners, residents and councilors who testified at the meeting praised a scaled-back plan from New Moran, Inc. Tad Cooke, Erick Crockenberg and Charlie Tipper hope to break ground on the $15.4 million project by the end of 2017. A previous iteration from the same trio had a price tag of $34 million.

First, the group must get approval from the city. The Community and Economic Development Office will spend the next three months reviewing the plan.

A “citywide team” from numerous departments will evaluate the proposal on its financial viability, design, community benefits and other criteria, according to CEDO director Noelle MacKay. We want to “see whether it makes sense for the city,” MacKay said.

The group’s new proposal would house the Burlington Winter Farmers Market on the first floor. Space for community arts space, events and performances would fill the second floor. Outside, the developers envision an ice skating rink, adjacent to the existing skatepark, along with two acres of landscaped grounds. The project “could and should be a ‘Church Street moment’ for this generation,” said Crockenberg. He called the project a “cultural and economic catalyst” for the city.

New Moran wants to fund the project with $5.8 million in tax-increment financing, along with $2.2 million in federal and state tax credits, and a $1.4 million federal grant, approved in October, “for waterproofing and flood resiliency.” The group would also seek $6 million in contributions from private donors — down from $11 million in a previous proposal.

MacKay has promised to submit a recommendation to the city council on the viability of the proposal by the end of the first quarter. New Moran would negotiate a development agreement with the city and apply for the necessary permits. Cooke estimated that it would take an additional nine months to raise the necessary $6 million. If all goes as planned, he said, they would begin construction by the end of the year.

Cooke touted the economic impact of the project, as well as the community benefits. But, he added, it’s not about personal profits. “This building really delivers to the community from the beginning,” he said.

The project has been a long time coming — more than a decade, in fact. On Town Meeting Day in 2014, Burlingtonians approved a ballot question allowing the city to demolish the building if the project didn’t come through.

That same year, the city signed a memorandum of understanding with the development team. But the plans to remodel appeared doomed last July, when the city dissolved the MOU with New Moran because of missed fundraising deadlines. The city's decision meant the group lost exclusive rights to the project.
But when CEDO issued a request for other proposals in September, it received just one by the December deadline — courtesy of New Moran, Inc.

At Monday’s meeting, community stakeholders widely praised the project. Representatives from the Flynn Center for the Performing Arts, the Burlington Farmers Market, PC Construction and other local businesses praised the project as well-designed and economically feasible.

New Moran has “reached more broadly and deeply into the community” to address local needs than any other proposed Moran developer, said Mark Naud, executive director of the Community Sailing Center. If the city lets this proposal slip, he added, “we’ll have relinquished an opportunity that we will regret.”