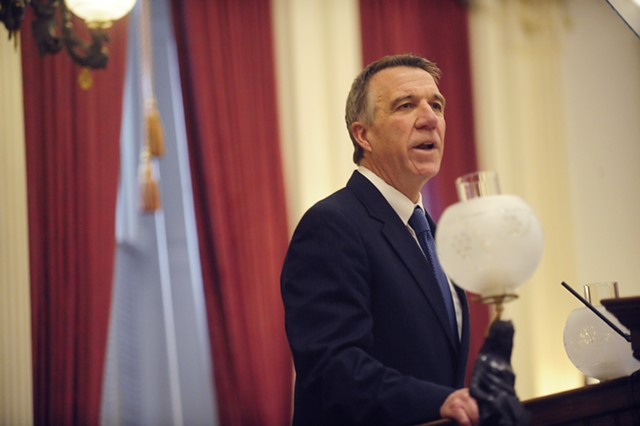 “I am committed to doing whatever it takes to put us on a new path to a more prosperous future,” Scott told a joint session of the House and Senate.

That, he said, would require level-funding for most state agencies — as well as for public school budgets. The latter have long been controlled by local communities.

The much-anticipated, 43-minute address offered the first indication of how Scott — a Berlin Republican who took office January 5 — would meet his campaign promise to be fiscally prudent while protecting the most vulnerable.

The governor acknowledged the drastic change his budget proposal represented — but he was unapologetic.

“Believe me when I say I know these are incredibly strong measures,” Scott said. “I’m not asking school districts for anything more than what I’ve asked from state government.”

While running for the open governor’s seat last year, Scott mentioned none of the specific changes to education funding he proposed Tuesday.

Some of the proposals he outlined in the speech — to boost funding for early childhood and higher education — won a warm reception. But lawmakers and those impacted by Scott’s proposed budget were surprised by how much his plan would shift the power of the purse strings.

“We value local control in this state, and now we have a governor who’s proposed a dictum from the state as to how much schools are going to spend,” Rep. Dave Sharpe (D-Bristol), who chairs the House Education Committee, said after the address.

Republicans, who are in the minority in the legislature, tended to be more positive. “This is the first time I have ever heard a governor propose absolutely no increase in taxes and no increase in fees to pay for his budget proposal,” said Rep. Heidi Scheuermann (R-Stowe). “This is the kind of leadership we need! I so look forward to working with the governor to advance his priorities.”

To give school districts more time to adjust to the level-funding mandate, Scott proposed delaying local budget votes until May 23 — a break from Vermont’s traditional Town Meeting Day polls, scheduled this year for March 7.

Young acknowledged that lawmakers would need to act quickly on the idea so that school boards, which have already begun crafting budgets, could change course. She dismissed any suggestion that the move would dampen Vermont’s town meeting tradition, in which local communities gather to vote on town and school budgets.

Scott would use money saved to boost childcare and prekindergarten education funding by $9.6 million next year. He also proposed budgeting $6 million more for higher education.

The governor’s proposal includes $4 million — a dramatic 15 percent increase — in state funding for the Vermont State Colleges, which have long suffered from a lack of funding. A recent decision to merge Johnson and Lyndon state colleges stemmed from concerns about declining enrollment and funding.

VSC chancellor Jeb Spaulding might have been the happiest person in the Statehouse after Scott’s address Tuesday.

“We’ve had decades of underfunding,” he said. “It will put our system on a very solid financial footing.”

The University of Vermont and Vermont Student Assistance Corporation would each get a $1 million increase.

Scott told legislators that some of the new money for higher education would go toward programs for those pursuing trades.

“When I first entered college, it was to be a tech education teacher. Being able to build something from nothing always inspired me,” he said. “So it is especially meaningful for me to propose investments that will provide young Vermonters with more career and technical experience.”

Robyn Freedner-Maguire, campaign director for the organization Let’s Grow Kids, was happy to hear about increased funding for childcare and early childhood education. “I think it’s huge,” she said.

Others worried, however, that Scott’s proposed budget limits would cripple K-12 schools — and run counter to Vermonters’ desire for local control.

“To level-fund spending from last year, you can only achieve that if you reduce personnel, cut programs and take people out of the classrooms,” said Senate President Pro Tempore Tim Ashe (D/P-Chittenden).

Martha Allen, president of the Vermont-National Education Association teachers’ union, said her organization might challenge the constitutionality of Scott’s proposals.

Rep. Kitty Toll (D-Danville), chair of the House Appropriations Committee, asked Finance Commissioner Andy Pallito after the budget address whether the Scott administration had other options if Vermonters dismissed the education funding proposals.

“At this point, there is no Plan B,” Pallito replied.

“I’m hoping there can be a Plan B,” said Toll, who called the proposal a major change. “Ambitious isn’t even close as a word to describe it.”

Young, in briefing members of the media on the budget, repeated that refrain again and again. “We know it’s a very heavy lift,” she said. “It’s going to create quite a lot of discussion.”

Among other plans Scott outlined in his budget proposal: