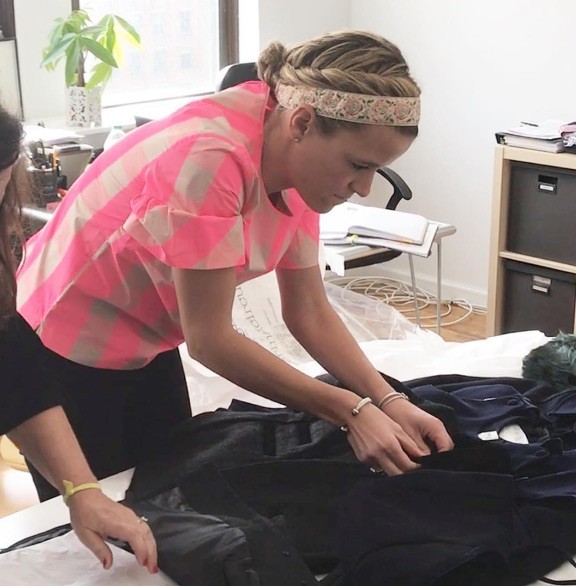 A children’s wear designer who launched her company in Charlotte watched the inauguration events coverage with delight.

The blue velvet dress and matching wool coat that Ivanka Trump’s daughter wore at a pre-inauguration event Thursday is one of 11 pieces that former Charlotte resident and Saint Michael’s College grad Kate Bowen designed for the festivities.

Accompanying her parents and grandfather, Donald Trump, 5-year-old Arabella Kushner wore the blue ensemble to the wreath-laying ceremony at the Tomb of the Unknown Soldier at Arlington National Cemetery Thursday. Seeing the outfit on TV was a thrill, said Bowen, in a telephone interview with Seven Days.

“Oh my gosh, I, like, couldn’t breathe for a minute. I was so excited.”

It’s possible that little Arabella will wear another Bowen-designed outfit to the post-inaugural prayer service at the National Cathedral in Washington, D.C. Saturday.

Bowen founded her company, Petit Peony, when she and her husband were living on a dirt road in Charlotte, having moved to the town in 2013. Two of Bowen’s three young children had been born and it seemed like a good time to pick up a needle and thread.

“I was staying at home and that’s when I took up sewing, sewing my daughter’s clothing and it turned into a business,” Bowen said.

One of the investors in Petit Peony knew Ivanka Trump, herself a clothing designer, and she became a customer, said Bowen.

Bowen lived in Charlotte for three years before moving with her family to Duxbury, Mass., last June.

When Ivanka Trump called to see if Bowen was interested in designing outfits for the inauguration, she jumped at the chance. She flew to New York three times for fittings with Arabella and also designed inaugural rompers and pint-sized coats for her little brothers, ages 3 and 9 months.

In all cases, Ivanka Trump wanted “traditional, classic, tailored pieces,” said Bowen, who declined to say how much the garments cost.

The former Vermont resident, who grew up outside of Albany, N.Y., says she chooses not to mix fashion with politics. Bowen wouldn’t say whether she voted for Ivanka Trump’s dad, newly-sworn-in President Donald Trump.

“I don’t discuss my political views,” said Bowen, but added that she likes what Ivanka Trump stands for.

“I think her taking a leap of faith and reaching out to a small designer says something about her.”

When @ivankatrump asks you to design inaugural clothing for her children you first say YES and then totally panic on the inside. The navy blue wool coat pictured on Arabella in this photo and her navy blue velvet dress underneath is a custom @petit_peony design and I could not feel more honored and overjoyed to create her sweet children wardrobes for this momentous event. 📷 @dailymail #petitpeony #ivankatrump #womenentrepreneurs #elevate