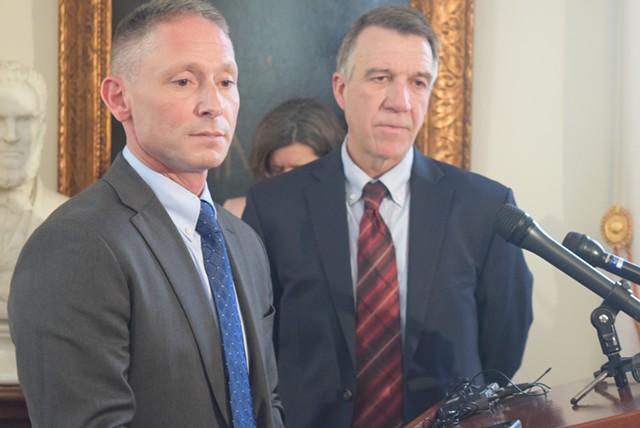 Bringing oversight of the state’s information technology programs
under one agency? That proposal from Gov. Phil Scott makes sense, legislative leaders said Tuesday. His idea of merging the state Liquor Control Department and Lottery Commission? That, too, probably has merit.

But merging the Labor Department with the Agency of Commerce and dubbing it the Agency of Economic Opportunity? That’s not going over as well.

“This will better align putting workers with employers,” Scott said Tuesday in explaining the proposed change, which he seeks to make through executive order that he formally filed Sunday.

Of Scott’s three reorganizational proposals, the Labor/Commerce one stands out as the most problematic, said Senate President Pro Tempore Tim Ashe (D/P-Chittenden).

“The two organizations have two different missions,” said Rep. Bill Botzow (D-Pownal), chair of the House Commerce and Economic Development Committee. Commerce’s job is to attract business while Labor’s job is to regulate business, he said.

Labor activists have the same concern. “It seems a difficult task to have both the promoter of business development in Vermont simultaneously be responsible for enforcing and adjudicating our labor and employment laws,” said Jeff Potvin, president of the Vermont Building and Construction Trades Council.

Legislators have 90 days to respond to Scott’s special governmental reorganization executive orders. Either the House or the Senate can vote to defeat the plans. If they do nothing, the changes take effect. Scott expressed a willingness Tuesday to work with lawmakers on proposed revisions.

Michael Schirling, the newly appointed Agency of Commerce secretary, and Lindsay Kurrle, just hired as Labor Department commissioner, said they don’t know who would come out of the reorganization with what title — but that they are OK with that.

of the Labor Department’s functions, including inspection of ski trams and occupational safety, would move to the Department of Public Safety. The rest, including oversight of unemployment insurance and workers’ compensation, would stay in the new Department of Labor and Workforce Development.

Scott said the change isn’t meant to save money, though he hopes it eventually will. The goal, he said, is to better align job training programs with the jobs that are available. He said he didn’t know what it might cost the state to make new signs and other changes associated with the new names.

Scott also proposes to bring all of the state’s IT projects under the oversight of a newly named Agency of Digital Services. That would replace the current Department of Information and Innovation, which does not have direct oversight of all the IT infrastructure sprinkled throughout various state agencies.

That’s an issue previous administrations and legislatures have wrangled with for years. “There’s some wisdom there,” Ashe said Tuesday.

Merging the Lottery Commission and Liquor Control Department should eliminate redundancies between the two, Scott said. Many of the same retail outlets sell both products, he noted. Scott said his administration had no estimates on whether the change would save money, however.

Scott indicated he has no other plans to reorganize state agencies, but he offered hints that some other state functions could see changes.

On the Department of Libraries, he said he deliberately has not hired a new state librarian while considering options for that entity. “Everything’s on the table at this point.”

When asked about the future of Vermont Life, a magazine that promotes the state and is operated under the Agency of Commerce, Scott said, “We’re looking at options there, too.”