Scott Plans to Merge Labor and Commerce, Lottery and Liquor | Off Message

Scott Plans to Merge Labor and Commerce, Lottery and Liquor

Gov. Phil Scott plans to reorganize several state entities, moves that his staff maintains will allow the state to better focus its efforts.

Scott plans to announce the changes Tuesday, according to a memo Susanne Young, his secretary of administration, sent to staff members Friday.

Scott also plans to combine the lottery and liquor departments into one, and to reorganize oversight of information technology projects throughout state government.

The memo did not go into detail about the cha 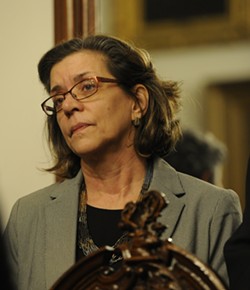 nges, but Young said no employee’s job would be at risk. “These actions are about strengthening organizational focus and improving outcomes,” she wrote.

Scott is proposing to make the changes through a rarely used provision. State law allows governors to propose changes in the organization of the executive branch by executive order, but holds them to a January 15 deadline.

Legislators have 90 days to consider the executive orders. Lawmakers could choose to nix the plans by a vote in either the House or Senate.

Young noted in the memo that the January 15 deadline came just nine days after Scott took office. She said the governor planned to work with the legislature to enact the changes.

Friday afternoon, Scott walked to the Statehouse offices of House Speaker Mitzi Johnson (D-South Hero) and Senate President Pro Tempore Tim Ashe (D/P-Chittenden). The governor said as he left Johnson’s office that he gave each a quick outline of his executive order plans. Both Ashe and Johnson said he asked them not to discuss the plans publicly until he announced them.