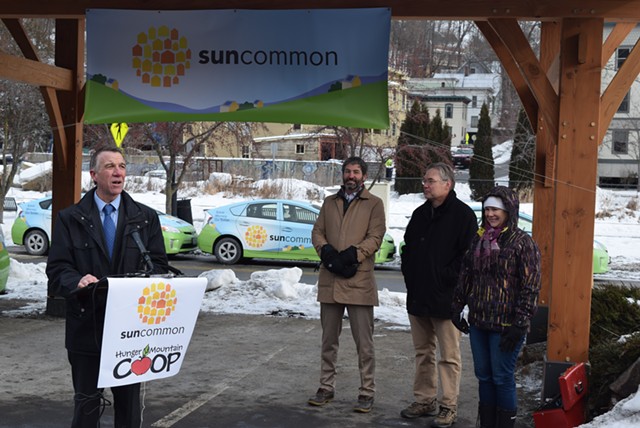 There’s no doubt that James Moore would have preferred Democrat Sue Minter to have won Vermont’s 2016 gubernatorial race over Republican Phil Scott.

But ask Moore his preference in the race and the cofounder of the Waterbury-based SunCommon solar company — and former clean energy advocate for Vermont Public Interest Research Group — will sidestep the question.

“I’m thrilled that he’s here with us,” Moore said as Scott agreed to spend his very first press conference as governor highlighting a SunCommon solar project in Montpelier.

Scott’s morning appearance showing off the Hunger Mountain Co-op’s new solar canopy did reveal something about Vermont politics: All sides are quick to embrace reality, even as they struggle with their differences behind the scenes.

“I want to thank you for inviting me here today,” Scott told the team of SunCommon staff, touting companies like theirs as “exactly what we need” to attract young professionals to Vermont.

Scott and SunCommon celebrated their common ground while — for the moment — setting aside the fact that they don’t entirely agree about the future of renewable energy in Vermont.

Scott, while campaigning for governor, pledged to seek a moratorium on industrial-sized wind projects. Scott was invited to, but did not attend, Renewable Energy Vermont’s annual conference, which was held during the election stretch run.

That clearly is what Moore had in mind when he invited Scott to join him on a balmy 2-degree morning to unveil the new solar canopy in Hunger Mountain’s parking lot. The $60,000 solar panel setup will chop 2 percent off the co-op’s electric bill while also offering shoppers’ cars shelter from the weather.

“We have a young but strong solar industry,” Moore said before the press conference started. And he knows that a governor has a lot of influence over how strong that industry stays. Moore said he’s hoping the state will keep a steady, predictable set of solar-siting regulations “that don’t whipsaw back and forth.”

That means, in his view, no changes to the siting law enacted last year, which is designed to give communities more say in where energy projects can be built.

Standing next to Moore at the podium in the Hunger Mountain parking lot, Scott had a different view. In addition to his push for a wind moratorium, he will seek changes to last year’s siting law, with the goal of giving communities even more influence over the siting of large-scale solar projects. Such a stance could slow or derail future renewable energy projects.

“I would like to see more input,” Scott said.

Were those shivers going up the spines of Moore and the other renewable energy fans surrounding him? It was a chilly day, after all.