Sorrell Critic Asks Court to Order Him to Preserve Emails 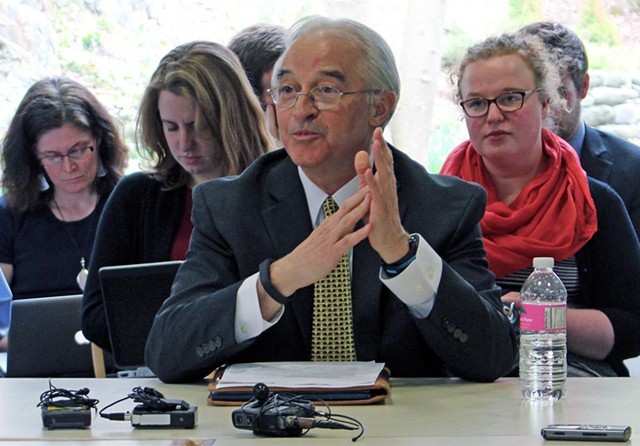 On the day he left office after 20 years, former attorney general Bill Sorrell got a reminder that a legal challenge could follow him into retirement.

On Thursday, Vermont Republican Party vice chair Brady Toensing, who has waged a court battle to force Democrat Sorrell to turn over records of his correspondence with lobbyists, asked a judge to order Sorrell to preserve emails he allegedly sent from his private account to a lobbyist until the ongoing lawsuit is resolved.

Toensing argues that Sorrell, by not turning over the emails, is violating Vermont’s Public Records Act, which generally holds that public officials must turn over all correspondence that relates to their official duties, even if it comes from private email accounts.

“In the past, he’s shown he’s willing to flout his duties to produce public records, and I want to make sure this public property is protected,” Toensing, an attorney, said in an interview. “We have a right to know what he’s keeping.”
Sorrell did not immediately respond to a message seeking comment. A hearing in Chittenden Superior Court has not been scheduled.

The controversy stems from a 2013 dinner in Washington, D.C., during which a group including representatives of Texas law firm Baron & Budd gave Sorrell an envelope with checks totaling $10,000 in campaign donations. At the dinner, the firm’s representatives suggested Sorrell consider filing suit against the oil and gas industry, according to an affidavit signed by Sorrell. Sorrell later filed the suit and hired Baron & Budd to represent the state.

Toensing later filed a complaint against Sorrell. A panel of 11 state’s attorneys dismissed some of the allegations, and referred the most serious to the Vermont State Police, which declined to investigate.