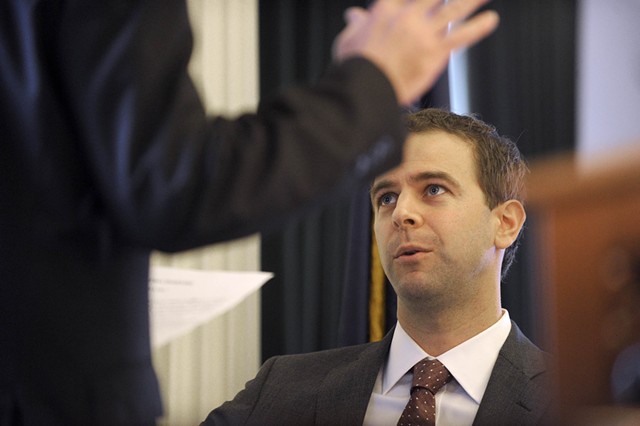 Thumb-twiddlers, beware: Tim Ashe is having none of you.

After taking the oath of office from Republican governor-elect Phil Scott (serving his last day as lieutenant governor and presiding officer of the Senate), Ashe ascended to the podium and delivered remarks that displayed stark contrasts between his agenda and Scott’s, and between his leadership style and that of his predecessor, John Campbell, the Windsor Democrat.

His address included an admonition to “thumb-twiddlers” and a warning that his ambitious agenda “isn’t for the faint of heart or the mere dabbler.” It’s doubtful that he had Campbell specifically in mind, but the former pro tem had a notoriously dilatory approach to the job. Ashe promises to be an entirely different sort of leader.

Ashe spoke as Scott stood just a few feet away, and he outlined an ambitiously progressive platform that’s in stark contrast to Scott’s cautious, no-new-taxes agenda. It also delivered a strong counterpoint to the stereotype of Ashe as a temporizing figure who’s become more Democrat than Progressive.
He spoke of two Vermonts: one full of people who are “well-educated, enjoy the outdoors, soak in the great culture ... and have skills that are valued in the workforce.

“But then there’s the other Vermont,” he continued. It’s a place full of people who have lost their jobs to global trade, “families racked with drug or alcohol or mental health problems,” people getting by on “small paychecks” who are “at best holding the line, but more likely losing economic ground.” 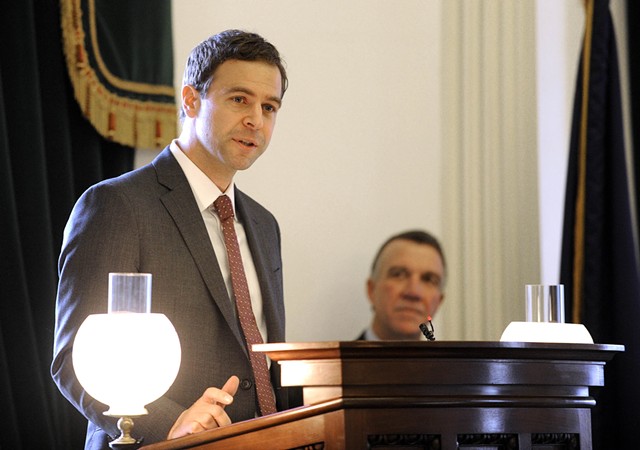 Thus far, the governor-elect would agree. But Ashe then offered a prescription centered on government action to create “one Vermont, a place where the dumb luck of who you’ve been born to doesn’t on the one hand confer a near guarantee of a great, long life to some kids, and on the other hand condemn other kids to lives of struggle, poor health and poverty.”

Ashe vowed to pursue measures to ensure physical and mental health, quality education, a clean environment, and economic opportunity for all. There was no talk of tax cuts or the “affordability crisis” that’s a constant refrain of the incoming administration.

While laying out an aggressive agenda and a vigorous leadership style, Ashe also paid plenty of deference to great figures of Vermont political history from George Aiken to Howard Dean, and to the institution of the Senate and its members. “I can say sincerely that I am little more than what I’ve learned from each of you these last eight years.”

His challenge will be to bring a disparate Senate together in support of a strongly progressive agenda, in the face of a new governor with a very different idea of the way forward.

The Senate proceeded to a number of ceremonial tasks, including the unanimous election of Sen. Dick Mazza (D-Grand Isle) as the third member of the Committee on Committees. That panel will now carry out its principal task: selecting chairs and members for each of the Senate’s standing committees.