by Paul Heintz and Candace Page 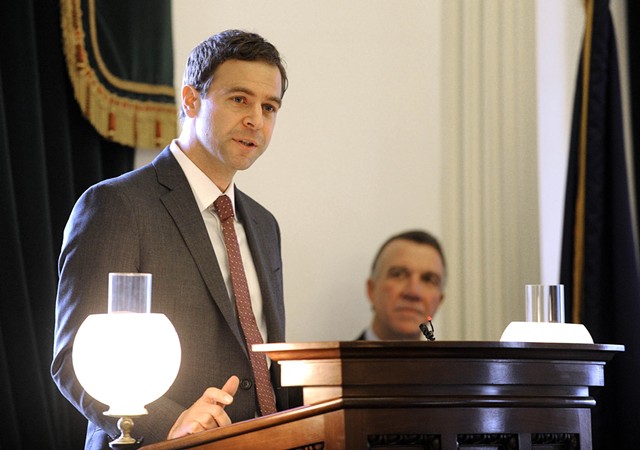 When Paula Routly and Tim Ashe began dating in 2002, she was the publisher and coeditor of Seven Days and he was a union organizer for United Academics. Nearly 15 years into their relationship, her job title remains the same. His, however, has changed.

Throughout Ashe’s political ascent, Seven Days has addressed Routly’s potential conflict of interest in a variety of ways, depending on Ashe’s role at the time. When he ran for mayor, Routly recused herself from assigning and editing stories related to the race — and prepared herself for the possibility that he would run the city her newspaper covered so closely.

“I had to ask myself: What if Tim wins?” Routly wrote in a March 2012 story about other so-called “power couples” in Vermont.

He didn’t — and she returned to her role managing the Seven Days news team, recusing herself when his name came up and running a one-line disclosure when it appeared in print.

On Wednesday morning, Ashe did win — this time a race for president pro tempore of the Vermont Senate.

The consensus was that Routly ought to recuse herself from involvement with Seven Days’ coverage of the Statehouse and statewide politics.

“To date, Tim and I have been able to maintain solid boundaries as they relate to our respective careers,” Routly said, noting that the growing size of Seven Days’ news team has allowed her to step back when necessary.

“Going forward, though, we’re anticipating that won’t be enough,” she continued. “Just because Tim’s name isn’t in a story doesn’t mean it doesn’t involve him in some way. So, for the good of the news team I’ve built and nurtured, it’s best for everyone — our writers and readers — if I bench myself.”

To address the conflict, Seven Days plans to take the following specific steps:

The experts we consulted reminded us that relationships between politicians and journalists are nothing new.

When Alan Greenspan chaired the Federal Reserve, he was married to NBC News correspondent Andrea Mitchell. When Jay Carney served as White House press secretary, he was married to ABC News correspondent Claire Shipman. And while serving in the U.S. House, Congresswoman Chellie Pingree (D-Maine) was married for a time to Donald Sussman, who held a financial interest in the Portland Press Herald and other major Maine newspapers.

While such conflicts may be unavoidable, the experts told us, there are generally accepted practices to mitigate them.

“It’s important to manage both conflicts of interest and the appearance of conflicts of interest,” McBride told us. “So you’re managing the actual conflict of interest by removing the publisher from any decision-making role she might have that could potentially benefit her partner. You’re removing the appearance of the conflict by disclosing all this information in multiple ways, so that any member of your audience who has a question will readily be able to discover how the paper has separated the publisher’s personal life from her professional life.”

Kennedy, who spent a decade covering the media for the late Boston Phoenix, sees the situation similarly.

“The principle is that your audience has a right to know about any information regarding Seven Days that could affect the integrity of your journalism — and about what steps you’re taking to make sure the paper remains as independent and free of conflicts as possible,” he said. “That said, you should go into this with the frame of mind that your audience trusts you because you’ve earned that trust.”

While the experts we consulted largely agreed with our approach — and one another — there were some differences of opinion. Chinlund, for example, thought it prudent to include a standing disclosure under the paper's masthead. But Kennedy thought that would be “excessive,” and McBride warned us against “annoying” our readers with too many disclosures.

“Good for you guys, but it could be a bit of overkill,” she said.

“We’re a small state and these things are bound to happen,” said Mindich, a former assignment editor for CNN who previously advised the paper on its conflict-of-interest policy when Ashe ran for mayor. “But I think that Seven Days has done a great job of making an effort to separate one of the publishers from her partner. And I think that the paper has always been seen as independent.”

We hope so, but we recognize that — no matter what policy we put in place — you, our readers, may continue to have questions and concerns about our approach. We hope you will share those with us and let us know how we’re doing. You can reach Paul by emailing paul@sevendaysvt.com and Candace at candace@sevendaysvt.com.