Walters: When Is a Vacancy Not a Vacancy? | Off Message

Walters: When Is a Vacancy Not a Vacancy? 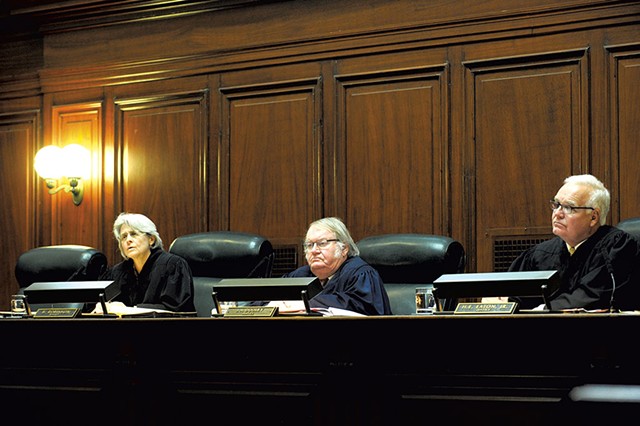 On Tuesday afternoon, the Vermont Supreme Court will consider a case involving itself and the implications of the word “vacancy.” And the very person who has triggered the case will sit in judgment upon it.

That person is Supreme Court Justice John Dooley. In September, he declined to seek reappointment to the bench, and his term ends in March. After he announced his pending retirement, outgoing Democratic Gov. Peter Shumlin declared his intention to appoint Dooley’s successor.

Since then, House Minority Leader Don Turner (R-Milton) challenged Shumlin’s authority to fill a vacancy that won’t actually exist until after Shumlin leaves office. Turner’s argument rests on the Vermont Constitution’s employment of the word “vacancy,” which would be a dangerous trigger word for a drinking game during Tuesday’s hearing. Appealing to common sense, he asserts that there can’t be a vacancy until the seat is actually, you know, vacant.

For his part, the governor appeals to state law, which seems to grant him authority to replace a member of the judiciary as soon as the vacancy is inevitable. He argues that this is already the case, since the statutory deadline for Dooley to seek reappointment has come and gone.

On December 23 the court ordered Shumlin not to act, pending a hearing on Tuesday — less than two days before Shumlin leaves office. If the court rules in his favor, he is ready to choose one of the six nominees approved by the Judicial Nominating Board. “He’s interviewed all the candidates,” the governor’s spokesman, Scott Coriell, says, “and is prepared to make an appointment.”

When you read the arguments on one side, they seem to make sense. As do the arguments on the other side. At the same time, thinking too closely about this case runs the risk of opening a linguistic black hole beneath your feet.

Tom Little, a former Republican state representative and respected Vermont attorney, notes with tongue slightly in cheek that “Justice Dooley is sitting on the matter. That would seem to be tangible proof that the seat isn’t vacant.”

Well, yes. And then again, no.

As Sen. Dick Sears (D-Bennington) noted in a brief filed in support of Shumlin, “Dictionary definitions have minimal utility in interpreting constitutional language.” Or, as a layperson might put it, “vacancy” doesn’t necessarily mean “vacancy.”

This is the kind of thing that ensures full employment for members of the bar.

Sears entered the fray at the last minute, filing his brief just before the court’s deadline on the afternoon of December 30. On December 28, Sen. Joe Benning (R-Caledonia) had joined the suit in support of Turner. Benning’s entry was sparked by concern that the court could throw out the case on procedural grounds — i.e., that Turner lacks “standing” to bring the case.

Since the state Senate must approve judicial appointments, Benning’s case for standing is more direct than Turner’s. Sears offers a differing view from within the ranks of the Senate and, as a longtime senator and chair of the Senate Judiciary Committee, his view of the constitution and the law carries weight.

And what of governor-elect Phil Scott? It could be argued that he has the clearest possible claim to “standing,” since he would fill the vacancy if Shumlin does not. But Scott has stayed on the sidelines because he didn’t want to inject politics into the process at a time when a partisan controversy was raging over a vacancy on the U.S. Supreme Court.

Even so, Scott told Seven Days before his election that he’d hoped Shumlin would pass the vacancy on to his successor — whether it was Scott or his rival, Democrat Sue Minter.

Scott then explained that after winning the election, he thought it best to continue his abstention. “It would be inappropriate for me now to say, ‘Well, wait a second, now that I’ve been elected, I feel more strongly that I should be the one making the choice,’” he said. “So I just think you have to build up faith and trust. I said it; I’ll live by it.”

Both sides claim to be in the right, but neither has a clear precedent to offer. This precise situation — a judicial retirement announced before an election that will take effect after a new governor is inaugurated — has apparently never happened in Vermont history. Sears’ brief cites two cases in which a judge announced his retirement and a successor was named before the judge stepped down. But in neither case was a change in governorship involved.

Each side paints the other as politically motivated, and each claims to be as pure as the driven snow. Shumlin has said he’s just doing his job; Turner accuses him of overreaching his authority. Sears’ brief calls Turner’s suit “a political crusade,” while Turner insists: “It’s not about partisanship, it’s about the integrity of the court and the balance of powers.”

Those with a passion for the law, such as Little, are excited about the purely legal dimensions of the case. “It’s rare for there to be the possibility of original jurisdiction for the Supreme Court,” he notes. (The term indicates a case taken directly to the high court without any appeal from a lower court.)

Little is hoping for “a very strong and clear-cut decision, so that whoever is appointed, there’s no sense that there is a cloud over the nomination. A decision on the grounds of standing would leave a cloud over it.”

In terms of the court’s future makeup, the stakes are unclear. If this dispute was happening on the national stage, it would be a fight to the death and the airwaves would be full of breathless punditry. The courts are not nearly as politicized in Vermont; indeed, Scott said that if the nomination falls to him, he might choose from the same list of names now before Shumlin. “I would like to look at the list,” he said. “I don’t know who applied. No idea.”