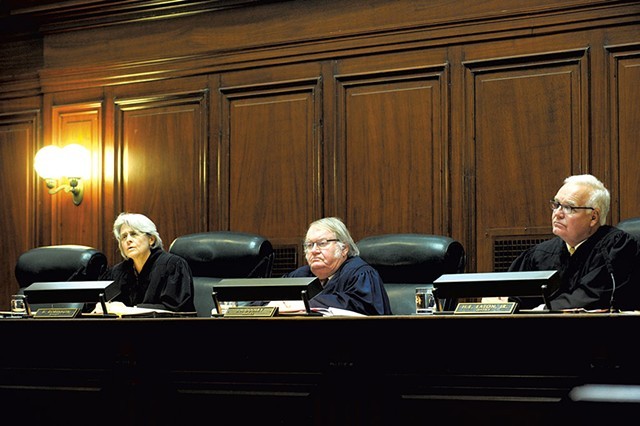 Two days before he steps down, Gov. Peter Shumlin will need to convince the Vermont Supreme Court that he has the legal right to appoint a replacement for retiring Justice John Dooley. The court has temporarily blocked Shumlin from picking a new justice in response to a legal challenge from House Minority Leader Don Turner (R-Milton).

Dooley announced in September that he would retire when his term ends on March 31. Shumlin raised some Republican hackles by promptly declaring that he would pick Dooley’s successor. Now, the outgoing governor will spend his final days in office defending his decision in court — a hearing is scheduled for January 3.

“By looking to make a consequential executive decision that should rightly be made in April 2017, at a time well past his gubernatorial tenure, Gov. Shumlin is setting a troubling precedent of overreach,” Turner said in a statement announcing his legal challenge.

Reached Friday, Turner said he’s “very pleased” with the court order and is confident he’ll prevail. “When I look up vacancy in the dictionary, it means no one is in the position,” Turner said.

Shumlin spokesperson Scott Coriell told Seven Days that “the governor has been following the law” per this state statute: “Whenever a vacancy occurs in the office of a Supreme Court Justice, a Superior Court judge, magistrate, or Chair of the Public Service Board, or when an incumbent does not declare that he or she will be a candidate to succeed himself or herself, the [Judicial Nominating] Board shall submit to the Governor the names of as many persons as it deems well qualified to be appointed to the office.”

Scott told Vermont Public Radio earlier this month that he had no plans to interfere in the process. In a statement Friday, Scott said he has “a lot faith in the Court to provide clarity on this issue and make the appropriate ruling.”

Coriell said Shumlin has interviewed the six candidates submitted to him by the Judicial Nominating Board but has not yet named a replacement for Dooley. Coriell deferred to Attorney General Bill Sorrell, who could not be reached, for further comment.