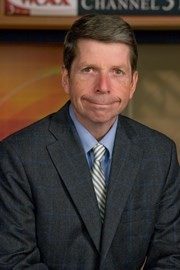 At least one of them may be familiar to viewers at home: WCAX-TV news director Anson Tebbetts, a former deputy agriculture secretary and longtime reporter, will lead Scott’s Agency of Agriculture. He replaces outgoing Secretary Chuck Ross. Tebbetts’ deputy secretary will be Rep. Alyson Eastman (I-Orwell), who plans to resign her seat in the House to take the job.

The governor-elect named Joe Flynn to serve as his secretary of transportation. A former rail director at the Agency of Transportation and director of emergency management, Flynn is currently the deputy commissioner of the Department of Public Safety. He will replace Secretary of Transportation Chris Cole, who has led the agency for the past year.

Scott also appointed Blue Cross Blue Shield of Vermont lobbyist Cory Gustafson to serve as commissioner of the Department of Vermont Health Access. In that role, Gustafson will oversee the state’s health care reform efforts, including the Vermont Health Connect insurance exchange. He replaces Steve Costantino in the job.

With Wednesday’s appointments, Scott has now named most of his top cabinet members, though he still must appoint a slew of deputy secretaries, commissioners and deputy commissioners.

“My goal with each appointment is to identify strong leaders who will work tirelessly on behalf of all Vermonters and who understand the urgent need to grow our workforce and economy and make Vermont more affordable,” Scott said in a written statement. “Anson, Alyson, Joe and Cory share these priorities and each bring unique experience and perspectives that will be a great asset to the state, our team and their individual agencies and departments.”

Tebbetts’ appointment launches a leadership transition at WCAX, whose news department he has led since June 2009. The station’s president and owner, Peter Martin, said he learned Wednesday morning that Tebbetts would be leaving and appointed anchor and executive producer Roger Garrity to serve as interim news editor.

“Roger will need to think through what it is he wants to do and what role he is most comfortable in,” Martin said. “If he would like to be [news director] on a permanent basis, that would be fine with us.”

According to Tebbetts, Scott’s transition team contacted him a week ago to discuss potential positions. He said he recused himself from news coverage while negotiations were ongoing and resigned the news director position Wednesday morning to avoid a conflict of interest. He said he would continue performing some administrative tasks at WCAX for a short period of time.

Tebbetts is no stranger to agriculture. He still lives on the Cabot dairy farm his family has owned since the mid 19th century. Tebbetts previously spent nearly three years as deputy secretary of agriculture during former Republican governor Jim Douglas’ administration.

“I’ve always had a tremendous interest in agriculture and the farm economy,” Tebbetts said. “I’ve had one foot in that my entire life.”