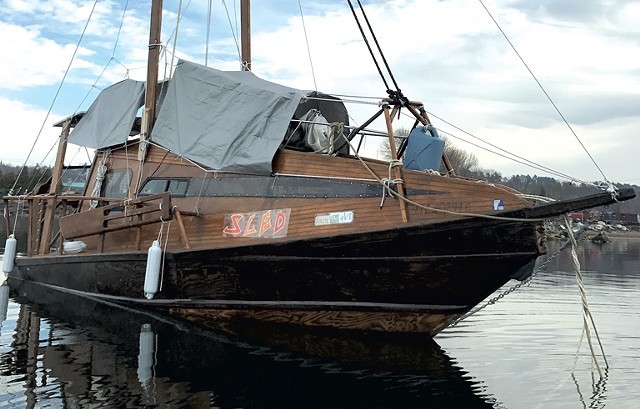 Lobb, 72, is a retired shipwright from Montpelier who hand-built the 26-foot sailboat, Sled — a hybrid sailboat/sled meant for the Arctic. The vessel can be winched out of the water and pulled across the ice by a dog team or snowmobile.

Lobb, who’s lived more than half his life aboard sailboats around the world, mostly in tropical climates — he learned shipbuilding in Hawaii in the 1960s — has endured his share of inclement weather and even a few shipwrecks. But living on Lake Champlain in last week’s dangerously cold weather proved too much even for this world-class sailor. “To tell you the truth, that last week was so miserable that I already feel like I went to the Arctic and came back,” Lobb told Seven Days after hauling the boat back to Montpelier on Monday. Once the sailboat’s lines were caked over with ice, “they felt like rebar.”

Lobb’s unconventional-looking craft, which he designed as a response to global warming and rapidly disappearing sea ice, attracted considerable local attention, curiosity and even concern. Because the boat’s stern sits so low in the water, regular visitors to Burlington’s waterfront inundated the U.S. Coast Guard with phone calls to check on its seaworthiness.

Lest anyone worry that Lobb’s craft sunk or was kicked out of the harbor by the Coast Guard or the Burlington harbormaster, Lobb insisted that neither was the case. He described the waterfront authorities as “very nice and unusually polite … Maybe they already knew what it was coming to.”

“I’ve been in a lot of places and I’ve never had people be so tolerant, which is a Vermont virtue,” he added. “I didn’t get one negative word or bad face.”

It was Lobb’s son, Ano Lobb, who lives in Barre and teaches at Dartmouth-Hitchcock Medical Center, who finally convinced his father that sleeping aboard the homemade vessel in the dead of winter might not be the wisest move.