New fines mean that truck drivers who venture into Smugglers’ Notch can wind up paying thousands of dollars — but that didn’t deter several from trying anyway.

Authorities ticketed seven commercial drivers who headed into the Notch after July 1 — the date the fines went into effect.

Tractor-trailers and buses have long been prohibited from the Notch, but the new law imposes a stiff financial penalty, said Col. William Elovirta, the enforcement and safety division director at the state Department of Motor Vehicles.

Six drivers were ticketed for “impeding the flow of traffic” by getting stuck in the Notch, a section of Route 108. That offense carries a fine of $2,347. Authorities issued another ticket, for $1,197, to a driver who violated the commercial vehicle ban for the windy, two-lane mountain pass that connects Stowe and Jeffersonville.

Four drivers were convicted, one case was dismissed and two other cases are pending, according to Joanne Charbonneau, the interim clerk at the Vermont Judicial Bureau.

Despite signs warning commercial drivers of the tight turns, several each year still attempt to squeeze through — and get stuck. Often, drivers from out of state follow GPS directions and don’t know of the hazards, then miss or disregard the signs, according to Elovirta.

The lengths of buses and big rigs makes it difficult to safely navigate the narrow, steep road, which is often lined with cars of hikers and leaf-peepers. The pass is generally open from May through October, and can close during inclement weather. This year, authorities closed the Notch for winter on November 19.

Before July 1, commercial drivers who got stuck could only be ticketed for failing to obey a “traffic control device,” which comes with a relatively paltry $162 fine.

“This certainly didn’t come close to addressing the impact to the motoring public and to first responders tied up by that driver/motor carrier’s actions,” Elovirta said.

The new penalties, which include a two-point hit on a driver’s license, are much more significant and hopefully act as a deterrent, Elovirta said.

Once a vehicle is wedged in there, Elovirta said, it can take hours to get out. The road is generally shut down to traffic so the driver can back down. If they’re really stuck, a wrecker is called in to move the vehicle.

Elovirta recalled the time a couple of years ago when a truck from Québec delivering sand to the Stowe Country Club got stuck after driving over a boulder. The driver was forced to dump his load of sand, and a crew used a cutting torch to remove the truck’s rear axle. Then a tow truck brought the trailer down the mountain.

“At that time, we could only issue a $162 ticket, but I’m sure the wrecker bill was in the thousands of dollars when it was all done,” Elovirta said. 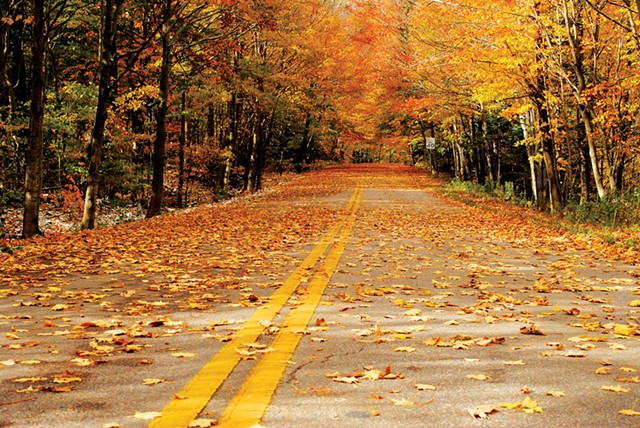 Elovirta’s spreadsheet documents the date, the direction of travel, the driver’s home state or “jurisdiction” and additional comments for 42 incidents. A majority of drivers were southbound, from Jeffersonville toward Stowe. Seven were from Québec, four were from Massachusetts and only one was from Vermont.

Eleven others were not known, often because the driver was able to leave the scene before police arrived. The data hasn’t been updated since September 11 of this year, Elovirta said, and doesn’t account for at least three more instances of wayward driving.

As smartphone use became prevalent, Elovirta noted an increase in incidents. Drivers plug in an address and follow the GPS directions, without considering road conditions, he said. It’s often truckers unfamiliar with the state roadways — evidenced by the fact that only one Vermont driver can be found among the 42 incidents.

How to prevent these nuisance tie-ups has been an ongoing struggle, Elovirta said. Roadside signs warning of the prohibition don’t always work, so the hope is that the fines will serve as a strong message. Other solutions discussed have been to install a chicane — a roadway obstacle that creates tight turns — or a “headache bar” that would stop vehicles too tall for the passage. Laser technology that measures the length of a vehicle is available, but expensive.

“It’s just really designed for a passenger car,” Elovirta said of the mountain roadway. “There are some intelligent solutions out there, but it’s one of those things we’ll continue to talk about. What can we do to improve?”