Burlington School Board Member Goes Head Over Heels for Levity

The Burlington School Board meeting Tuesday night took unusual turns —literally. Board member Miriam Stoll got up from her seat and turned a cartwheel — a pretty good one, too.

The gymnastics move was Stoll’s attempt to dispel tension after a heated public comment session. During it, Burlington High School freshman Kolby LaMarche suggested to the board that he was being persecuted at school for backing Donald Trump.

“As a student who has been harassed for supporting president-elect Donald J. Trump, I blame in part the teachings of schools for their actions of their students,” LaMarche said to the board.

He said school teachings “have been shown to provoke students to be bigoted and violent to any who oppose them” and added: “As a student of Burlington school district I am asking for a new look into what students are being taught.”

LaMarche concluded by repeating a George Washington saying about the First Amendment: “If freedom of speech is taken away, then dumb and silent we may be led, like sheep to the slaughter.”

Most of the board members were silent after LaMarche’s statement. Stoll responded briefly, though. Without taking a political stance, she said that she was proud of LaMarche for expressing a view that might be different from what others believe. She added, “I’m very saddened to hear that you have been in any way ridiculed or treated poorly at school for your views.”

She also addressed concerns that people had brought up about cuts to the school library. Then, in an effort to break the tension, Stoll — a generally staid representative who asks probing questions about budgets and taxes — announced her intention to do something “that maybe will make people laugh” — and cartwheeled in front of the crowd.
The move evoked laughter and friendly applause at the meeting in the Edmunds Middle School library.* Stoll got back in her seat and the board went back to business, discussing audits, school repairs and class offerings.

By Wednesday morning, Stoll’s free-spirited acrobatics weren’t playing well with Burlington resident Helen Hossley, a regular attendee of school board meetings who was in the audience Tuesday night. She emailed Stoll to say her response to LaMarche was patronizing and inadequate.

“He has serious concerns about his safety, otherwise why did he bother to take the time to address the school board,” Hossley wrote. “He apparently isn’t being heard by the leadership at the high school and to follow up your act with a cartwheel was absurd.”

Hossley copied the school board and also posted her email on the Support Our Burlington Schools Facebook page. It generated a range of comments. Some said Hossley mischaracterized Stoll’s remarks. 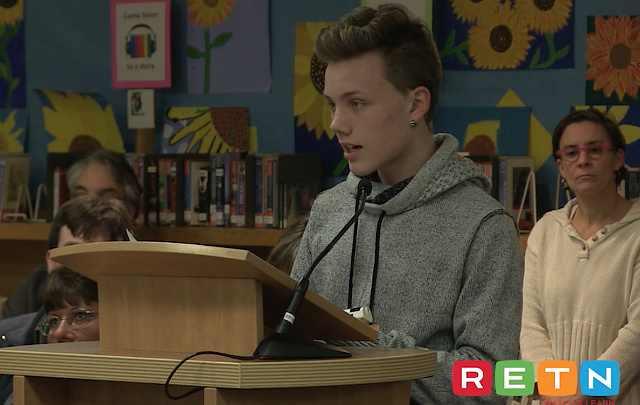 Others chimed in with broader comments about whether students who support Trump are being allowed to exercise freedom of speech in the public schools of a city and state that voted overwhelmingly for Democrat Hillary Clinton.

Bucci, who has interviewed LaMarche about his Trump support for the Register, was at Tuesday’s board meeting and said the freshman deserved his say.

Bucci said he couldn’t really comment on whether Trump supporters had freedom of expression at BHS.

“I think [LaMarche] brought up an interesting point. It’s hard for me to say because I’m not in his shoes,” Bucci said. “I think if he has concerns about his safety and problems with his education he has a right to bring it up to the administration and to the school board and that opinion should be respected.”

LaMarche volunteered for Trump leading up to the election, said Darcie Johnston, director of the Trump campaign in Vermont. He waved signs, knocked on doors and repeatedly cleaned up a large Trump/Pence sign in Williston that was defaced almost nightly.

“Kolby would go out and clean it up and get it back in decent shape to get it put back up,” Johnston said.

LaMarche talked about being picked on at school for supporting Trump, Johnston said. “We just supported him and appreciated the work he did for us and, you know, tried to make sure that everybody feels, ‘safe’ I guess is the word.”

The campaign did not go after the youth vote in Vermont very assertively, she added.

“I know that we had folks that tried to put some stuff up at UVM and some of the other campuses and it just disappeared,” she said. “As fast as it went up, it was gone. We really stopped trying … The other side preached tolerance but we quickly found out they are not very tolerant and I think that’s what Kolby found at Burlington High School.”

“I have not heard of any student experiencing bullying because of their support for Trump. I saw students with Trump T-shirts and hats during the campaign. I believe Kolby’s comments were societal statements about how individuals get treated with his viewpoint,” Obeng wrote.

Below is an edited video of the meeting, courtesy of the Regional Educational Television Network.
*Correction, December 16, 2016: An earlier version of this story misstated the location of Tuesday's school board meeting.