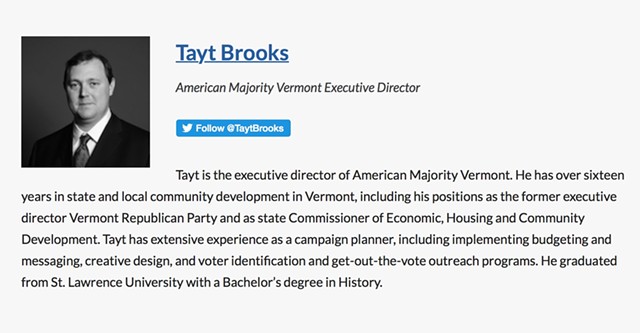 When governor-elect Phil Scott announced five new hires on Tuesday, most of the attention focused on Al Gobeille and Susanne Young, his first two cabinet nominees.

But the last of the five names should not be overlooked: Tayt Brooks will take a newly fashioned position on the fifth floor of the Pavilion Building. The hire is notable both for the job itself and its future occupant.

His title will be “director of affordability and economic growth initiatives.” Those were the cornerstones of Scott’s gubernatorial campaign — and remain his oft-repeated top priorities.

Brooks will be Scott’s point man on both. In an interview Wednesday, Jason Gibbs, the governor-elect’s choice for chief of staff, tried to downplay Brooks’ role as “a nuts-and-bolts job.” But those are the very nuts and bolts that hold the entire vehicle together.

This “nuts and bolts” guy will have significant input into virtually every agency. Brooks will exercise authority that’s comparable to, and parallel to, members of Scott’s cabinet.

Now, let’s turn to the man who will occupy that custom-fitted position.

When Democrats and liberal advocates talk about Brooks — off the record and on the record — the response is unfriendly, indeed.

“On a personal level, Tayt is a good guy,” said Conor Casey, executive director of the Vermont Democratic Party. “But he represents a highly partisan wing of the Republican Party.”

Those are partisan views about a guy who once served as executive director of the Vermont GOP — but there’s plenty of support for them in Brooks’ own resume. Since serving in former governor Jim Douglas’ administration, he’s worked for one of Vermont’s most generous conservative donors and for a prominent national Tea Party organization.

During the 2012 campaign, Burlington heiress Lenore Broughton established Vermonters First, a super PAC aimed at electing conservatives to office. She hired Brooks to run the outfit, which went on to spend more than a million of her dollars without any perceptible impact. (Notably, Seven Days caught Brooks lying during that campaign about a one-on-one meeting he had with then-gubernatorial candidate Randy Brock.)

When Broughton stopped pouring money into the Vermonters First sinkhole, Brooks joined American Majority, a national organization that develops young conservative politicos in the Tea Party mold. Some of its tactics fudge the line between aggressiveness and dirty tricks. One American Majority operative has said he spends “about 30 minutes a day” giving one-star reviews to liberal books and movies in an effort to “control the online dialogue,” according to Alternet. Another American Majority operation has been accused of promoting “scoops” about liberal misbehavior that are entirely made up or greatly exaggerated, according to Mother Jones.

Brooks was still, as of Thursday morning, listed on American Majority’s website as Vermont executive director.

That would seem to establish Brooks as a pretty darn conservative fellow, at least by Vermont standards — not to mention the “moderate” standard Scott sought to set during this fall’s gubernatorial campaign. His elevation to such a key post in the Scott administration will do nothing to calm liberal suspicions of the new regime.

Brooks’ new boss, chief of staff Gibbs, tried to calm the waters Wednesday.
“You should get to know Tayt,” he said. “He’s a good, decent human being. He’s not as conservative as Lenore.”

We’d welcome the opportunity to “get to know Tayt,” but he couldn’t be reached for comment Wednesday. Let the healing begin.