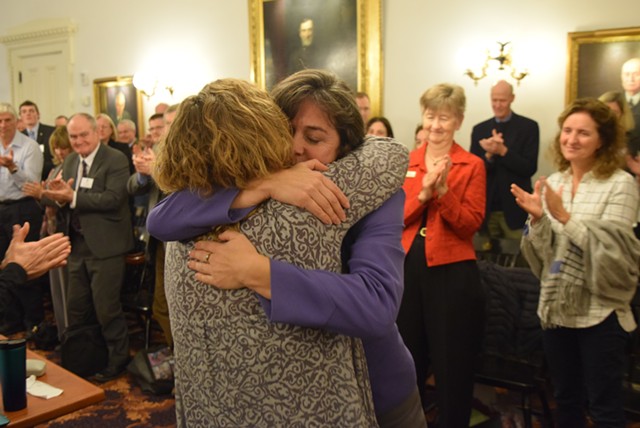 When Rep. Mitzi Johnson (D-South Hero) was a first-year legislator serving on the House Agriculture Committee in 2003, she learned how not to run a legislative committee, Rep. Bill Botzow (D-Pownal) told colleagues Saturday.

From there, Johnson grew as a legislator worthy of the House’s most powerful position, Botzow said as he seconded the nomination for Johnson to be the Democrats’ candidate for speaker.

Praising Johnson’s kindness, Botzow quoted former president Franklin Delano Roosevelt: “A nation does not have to be cruel in order to be tough.”

As expected, Democrats unanimously voted for Johnson at a caucus gathering at the Statehouse on Saturday. Outgoing House Majority Leader Sarah Copeland Hanzas (D-Bradford), who conceded the race for speaker to Johnson a week earlier, nominated her.

“Her work has proven her to be an innovative leader who is poised under pressure,” Copeland Hanzas told fellow Democrats about Johnson.

With Dems holding a strong majority in the House, Johnson is expected to officially win the speaker’s job in January when the new legislative session starts. Republicans have nominated Rep. Linda Myers (R-Essex) as their candidate for the position.

Johnson explained later that she learned a lot about legislative procedure as a first-year member on the Agriculture Committee. Democrats held a majority of committee seats, but chair Ruth Towne (R-Berlin) thwarted them at every turn, Johnson said. That sent Johnson scurrying to the clerk’s office to learn how committee members could convene a meeting without their chair, she said.