Burlington Councilors Consider a Pay Raise for Themselves | Off Message

Burlington Councilors Consider a Pay Raise for Themselves

The Burlington City Council agreed unanimously on Monday to consider a wage hike for council members.

Currently, councilors earn $3,000 a year — a figure that has stayed the same for more than 12 years, according to independent Councilor Dave Hartnett, who sponsored the resolution. Given the time he spends on the job, “I don’t believe it would be even minimum wage,” he said.

“We do it for the love of the city … but I think we need to be realistic,” he told the council on Monday. “In the last 12 to 16 months, I feel like I’ve spent more time with city council than I have with my family. That’s valuable time.” 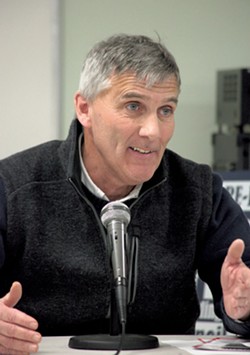 Before passing the resolution, the council voted to strike language in Hartnett’s original motion that called for a $2,000 raise. Now, the increase is undetermined. The charter change committee will discuss the resolution at its meeting Tuesday, and return to the council with a suggested figure. If approved by the council, the proposed increase would go on the ballot in March on Town Meeting Day.

The council shrunk from 14 to 12 members after a 2015 redistricting process, Hartnett noted, resulting in more work for fewer members. Hartnett, who represents Burlington’s New North End, estimated that he spends approximately 40 to 50 hours a month on council business and attending various subcommittees. A slightly higher salary may also increase the pool of those interested in running for a council seat, he added.

Support for the motion was widespread. “I’ve often thought about how much more I could do for my constituents with just that much more capacity,” said Progressive Councilor Selene Colburn after Hartnett made a motion to approve. Councilor Tom Ayres pointed to the South Portland, Maine city council, which offers its members health benefits in addition to basic compensation. Such benefits, Ayres said, may not cost the city significantly and could also provide an incentive for more community members to serve.

For context, Hartnett pointed out, Plattsburgh, N.Y., city councilors make $6,000 a year; he would not be in favor of doubling the current salary, he said. He chose the $2,000 figure arbitrarily, he noted later, but doesn’t support raising his pay any more than that.

Compensation has never determined his decision to run for the position, Hartnett said, but neither is it irrelevant. He works managing a Mobil gas station in Burlington, and said he uses the city council monthly pay check to cover his family’s winter gas bill.

With Burlington’s downtown redevelopment and other controversial issues looming, “more and more has been dumped on our plates,” he told Seven Days Tuesday. Still, he merely wants a review of the issue; if the charter change committee suggested no change in pay, he wouldn’t complain.

“It’s certainly not one of the driving issues facing the city,” Hartnett said.