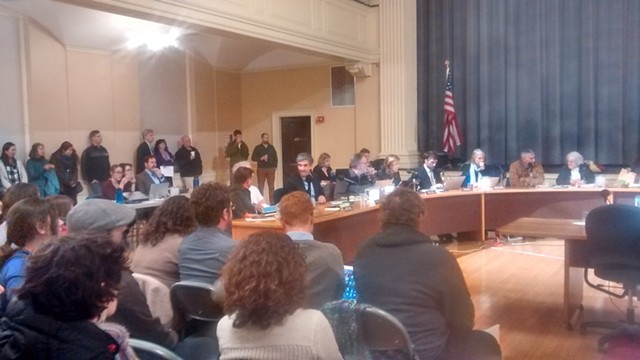 The Burlington City Council voted overwhelmingly Monday to back a pair of resolutions welcoming immigrants.

One supports the resettlement of Syrian refugees in the Queen City, while the second will begin the process of earning Burlington the designation of a sanctuary city. Both motions, which drew a large crowd of civilian supporters, passed easily.

Before the meeting, a group of more than 200 people held a vigil on the Burlington City Hall steps. Attendees cradled candles against the wind and carried signs supporting Syrian refugees.

“I see in this resolution the opportunity to send a message to members of our community to see that the city remains the place we enjoy today, that it is not impacted by these broader national decisions,” said Burlington Mayor Miro Weinberger.

After council debate and testimony of support from attendees, both resolutions passed by a wide margin. Republican Councilor Kurt Wright voted against both measures, while independent Councilor Dave Hartnett voted against beginning the sanctuary city process.

The resolution to accept the refugees is non-binding, said Kit O’Connor, who crafted the resolution in her role as the legislative coordinator for Vermont Amnesty International. “My bottom line is this,” she told those gathered at the vigil. “We can decide how we welcome people into our community.”

In the last 30-plus years, the city has accepted more than 7,000 immigrants from an array of countries, Weinberger said. Despite controversy, Rutland is forging ahead with its plan to accept more than 100 Syrian refugees, some of whom could arrive next month or early next year.

To date, the United States has accepted 14,463 Syrian refugees since the conflict began in 2011, according to O’Connor. The vetting process, which focuses on removing the “most vulnerable” individuals from the war-torn country, takes between 18 and 24 months, O’Connor told the council. “The United States has an incredibly intense vetting system,” she said.

The council discussed, and ultimately rejected an amendment from Wright to “support a review of, and a potential enhancement” of the vetting process.

The council also passed a resolution to “reaffirm Burlington as a welcoming and inclusive place for refugees.” The vote allows for the creation of an ad hoc committee to investigate the policies and consequences around becoming a sanctuary city. The committee will return to the council on January 9 with policy recommendations.

“It’s not a foregone conclusion” that passage of the resolution means that Burlington will become a sanctuary city, emphasized Progressive Council President Jane Knodell. But it does mark a step in the process.

Earlier this month, Weinberger declared his intent to make Burlington a sanctuary city. The measure would codify practices that prevent municipal workers, including law enforcement, from asking individuals about their immigration status.

It’s already standard operating procedure within Burlington, and some city councilors already voiced support for the measure. Winooski has also decided to pursue designation as a sanctuary city.

The announcements came shortly after president-elect Donald Trump said he planned to “cancel” federal funding meant for sanctuary cities within his first 100 days in office, according to NPR.

The moves are, in part, a response to the polarized national political scene. “The weight of these decisions has gotten heavier in the past few weeks,” Knodell said.

But it’s not just a knee-jerk reaction to Trump’s election, contended other council members. “As an all-white council, it’s important to recognize that these things are real for people in our community,” said Progressive Councilor Sara Giannoni. “The Burlington Police Department adopted a bias-free policing directive almost fifteen years ago and determined that a person’s immigration status is not relevant to its primary public safety mission except with regard to persons charged with crimes,” reads the resolution adopted by the council.

“The resolution is a strong indication that Burlington will not turn away,” Weinberger said.