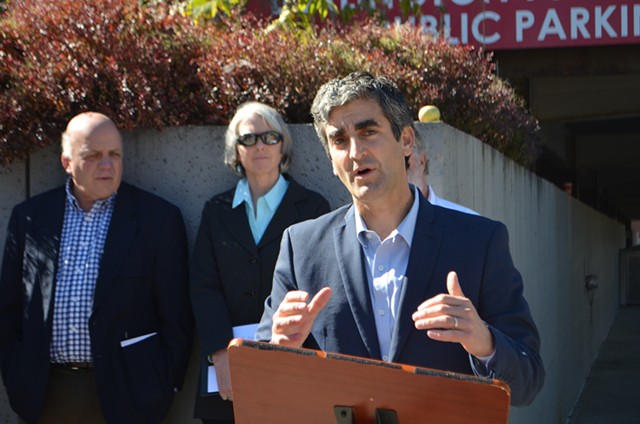 The Partnership for Burlington’s Future, a political action committee created by Mayor Miro Weinberger and chaired by city Councilor Dave Hartnett, spent about $41,000 on the effort. In the two weeks leading up to November 8, the group dropped more than $20,000 on advertising, signs and posters, along with food and supplies for a spaghetti dinner at the Fletcher Free Library. The PAC paid to host an election night party at the Courtyard Burlington Harbor to watch the results roll in.

The partnership, which also advocated for two other local ballot items that passed, raised about $40,000 and had an additional $3,267 left over from a previous campaign, reports filed Tuesday with the Secretary of State’s Office show.

Another group, Together for Progress, spent about $15,300. Together for Progress filed as a political question committee, which means it can spend money for a political cause but not raise any. The group is made up of the Burlington Business Association, Local Motion, AARP Vermont, the Chittenden County Regional Planning Commission and the Lake Champlain Regional Chamber of Commerce.

The political spending appears to have paid off. Voters approved creating a new downtown zoning district that will allow 14-story buildings and authorized $21.8 million in tax increment financing for street improvements in and around that district.

Neither vote was particularly close. Nearly 60 percent of residents voted for the TIF bond, while 54 percent voted in favor of the new zoning overlay.

redevelopment, which will include mixed office, retail and residential buildings and streetscapes around the project. Using the TIF money, Sinex would also reopen portions of Pine and St. Paul streets that were cut off when the current mall was built in the 1970s.

Sinex plans to break ground in the first half of next year.

Sinex registered his company, BTC Mall Associates, as a political question committee and reported spending nearly $5,600 on print newspaper advertisements and on Facebook. The ads touted the benefits of the project.

An opposition group, the Coalition for a Livable City, reported raising about $9,000. The group spent $7,627, filings show.

The coalition spent $300 November 17 on court

fees. The Coalition filed suit Friday against the city and Sinex in Vermont Superior Court, alleging the ballot language on the TIF question was misleading and seeking to invalidate the referendum results.

Weinberger said he expects the city to fight the suit, which, he said, “appears to be based on a basic misunderstanding of tax increment financing law.”