Opponents of the Burlington Town Center redevelopment want the results of an Election Day vote that approved tax increment financing related to the project tossed out because of bad ballot language.

The phrasing, according to the suit, therefore undersold the financial risk to voters, who are on the hook for the cost of the bond if the project falls through.

“This type of misrepresentation of resources should sound familiar,” Burlington attorney John Franco said in a news release Monday announcing the suit. “It is similar to the claim by Citibank N.A. that the city had misrepresented the amount of city resources available to support the Burlington Telecom project. Citibank’s suit was later settled for almost $11 million.”

Using TIF, a municipality takes out a loan for infrastructure improvements in a designated area on the promise that new property taxes from future development will pay back the debt.

The $21.8 million TIF bond would pay for public amenities — wider sidewalks, public art, better lighting, granite curbs, benches and a street construction project — in the eight blocks impacted by the makeover of the Burlington Town Center. 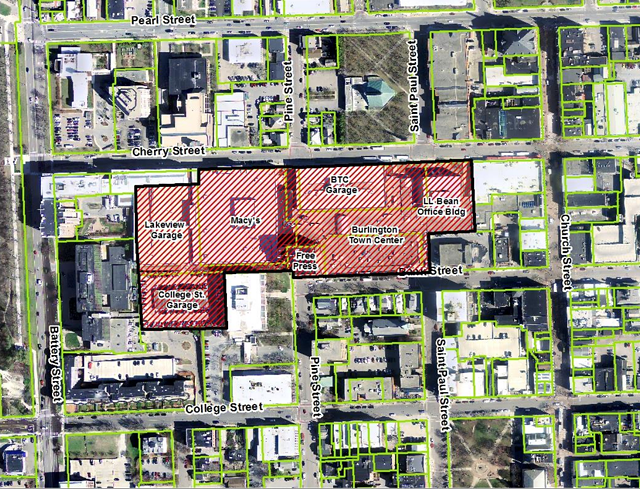 Another question on the ballot, which asked voters to approve a new zoning district around the mall property, passed 54 to 46 percent. That will allow Sinex to build up to 14 stories tall.

Both items were hotly contested by the Coalition for a Livable City, which is a plaintiff in the suit, along with three individual group members: Steve Goodkind, Michael Long and Lynn Martin.

Mayor Miro Weinberger and several city councilors spent weeks campaigning to get the ballot items passed. Supporters of the measures spent more than $30,000 during the campaign.

Sinex’s company, BTC Mall Associates, along with the city of Burlington, are named as defendants in the lawsuit.

Weinberger said in a statement Monday that the city was aware of the complaint but had yet to be formally served.

“The complaint appears to be based on a basic misunderstanding of tax increment financing law,” Weinberger said. “I fully expect the city will dispute this complaint.”

A representative for Sinex did not immediately respond to a request for comment. The lawsuit, filed in Vermont Superior Court in Burlington, also claims the city never received necessary approval from the Vermont Economic Progress Council, a board that oversees TIF projects.

“Chief among the problems with this is that there was no determination prior to the TIF vote that the public improvements listed in the ballot question can even qualify for TIF funding at all,” Franco said in a statement. “The TIF statute requires that to be eligible for TIF financing, the improvement cannot be for the benefit of the city generally, and must be for the benefit of the project.”

The suit also asks for the city to release an unredacted economic feasibility study on the project. The city released a document with certain monetary figures and estimates removed. Goodkind appealed the redactions under the Freedom of Information Act. Weinberger rejected the appeal in October.

“The ability to independently assess the viability of BTC Mall’s project is essential to voter approval of tax increment financing,” the suit contends.