When Brittany Dunn left Montpelier early Saturday morning to travel to North Dakota by chartered bus, she brought with her 125 pounds of meat in coolers, along with other food supplies. The 31-year-old volunteer coordinator from the environmental organization 350 Vermont is on her way to the Oceti Sakowin Camp in North Dakota to express solidarity with the anti-pipeline movement.

Members of the Standing Rock Sioux Tribe started the campaign in April to protest the construction of the $3.8 billion Dakota Access Pipeline by Texas-based company Energy Transfer Partners. The pipeline will transport crude oil from the Bakken oil fields in North Dakota to Patoka, Ill. Nearly 200 tribes have offered support to the Standing Rock Sioux, according to National Public Radio.

"We've never seen indigenous-led action of this magnitude and I want to be able to support that," Dunn told Seven Days Thursday.

Opponents of the project, who call themselves water protectors — not protesters — worry that the pipeline will leak into the Missouri River, which holds cultural, spiritual and environmental significance for the tribe. They also say the proposed route cuts through sacred burial grounds.

Dunn and her colleague Abby Mnookin had been thinking about traveling to North Dakota separately before deciding to coordinate the bus trip. It took them a week to do the planning. All 51 seats filled up.

"I'm a little surprised and excited that so many people are able to come at such a last minute," said Dunn.

Participants include students from colleges in Vermont and Massachusetts, Dunn noted. Before the trip, she encouraged everyone to read a resource package from the Standing Rock Solidarity Network, which includes camp protocols. The group will spend the week at the Oceti Sakowin Camp before returning on Sunday, November 27.

Some passengers, including Dunn, will link up with another Vermonters-led group, the NoDAPL Builders Delegation and Supply Caravan, which left Friday. Henry Harris and Erik Gillard are coordinating that group. They've raised close to $13,000 since last month to buy building supplies.

Harris told Seven Days Thursday that the caravan of trucks and cars comprise builders and volunteers from Vermont, New York, Ohio, Michigan and Minnesota. They will work throughout Thanksgiving week to help winterize and insulate existing structures with straw bales. 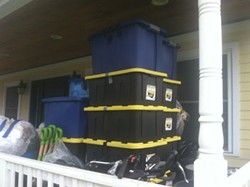 "I hope that we can get a bunch of warm places for the people who are there, participate in direct action, make enough pressure on President [Barack] Obama that he moves to protect water before [Donald] Trump [comes into office]," said Harris.

The Plainfield builder said he has contacted native leaders in North Dakota. "They are excited for us to come down and help them," he said. "This isn't just a struggle over the climate. But this is a struggle for native survival."

Clashes between police and demonstrators have followed what activists described as peaceful protests. The movement has received backing from several groups, including Black Lives Matter, as well as politicians and prominent personalities, such as former vice president Al Gore. Celebrities have organized benefit concerts.

The Standing Rock tribe points out that the pipeline was originally supposed to pass north of the state capital, Bismarck. But that plan was rejected and the pipeline was rerouted closer to the tribe's reservation.

"This pipeline was rerouted towards our tribal nations when other citizens of North Dakota rightfully rejected it in the interests of protecting their communities and water. We seek the same consideration as those citizens," Dave Archambault II, chairman of the Standing Rock Sioux tribe, said in a statement last month.

Brenda Gagne, an Abenaki, said earlier this month that she plans to send supplies to the Standing Rock tribe. Gagne runs the Circle of Courage, an after-school program in Swanton that teaches children about Abenaki traditions.

Melody Brook, the vice chair of the Vermont Commission on Native American Affairs, said the Elnu band of the Abenaki tribe has sent money and messages of support to Standing Rock.

"I hope everyone recognizes that they are making history," said Brook, when told about the Vermont delegations. "Standing up for what you believe in in a world that often marginalizes others and contains far too much injustice is, in essence, expressing your deepest love of the world around you and for all of its people."