When Scott Williams steps up to accept a Carnegie Hero Fund Commission medal on Monday morning at the Statehouse in Montpelier, he will appreciate the gesture and be grateful for the acknowledgement. But make no mistake, the 52-year-old Navy veteran will be incredibly uneasy.

The Carnegie medal will recognize Williams for what he did do on a Friday afternoon in August 2015.

Williams, the Washington County state’s attorney, was undergoing physical therapy that afternoon on a chronic neck injury at the RehabGYM, located in the same building. He said he heard the first shot, thought somebody had fired at the building, looked out the window and saw a body on the ground. As he ran for the door, he heard a second shot.

Williams, who knew both Herring and Sobel, said he took the rifle from Herring, asked two nearby men to hold her and tended to Sobel as she lay dying on the ground. Danelle Parrish, who was working at the RehabGYM front desk, joined him in holding Sobel.

“I spent about a minute and 40 seconds while Lara was alive watching her die,” Williams said.

Williams knows intellectually he had no chance of saving Sobel, that what he did was more than many others would have done and that people want to recognize him for that. “But it is not at all easy to be congratulated or thanked,” he said.

The Carnegie Hero Fund Commission has been recognizing “acts of outstanding civilian heroism” since 1904. Williams is one of 72 medal recipients this year and 9,893 since its inception. The medal comes with $5,000.

The Carnegie medal isn’t the first ceremonial recognition Williams has received. Just last weekend, the Vermont Police Association honored him at its annual dinner. “That was easier, but being around cops is very comfortable for that kind of thing, more so than other kinds of people,” he said. “They know what not to say. They know not to say, ‘Congratulations!’”

Congratulations (without the exclamation point) is the very word this reporter used in greeting Williams a few minutes earlier. At the time, he showed no sign of how it struck him, merely responding, “Thanks.”

“I get it,” he said, of people’s natural reaction to the fact that he has won a prestigious national award.

“I hope maybe people can learn something from this, which is — and I can only speak for myself — but that makes me sad every single time,” he said.

“Somebody walks up to me on the street and says, ‘Hey, congratulations, I heard about your thing,’ I become sad. And I don’t want to say, ‘Thanks, but you’re making me sad.’ I know they’re well-intended, and I respect that. It’s just not easy.”

What is a more appropriate response?

“Thanks,” he said. “That’s what it really comes down to. I think people want to express appreciation that I did something in a shitty situation. I get that. Being absolutely objective, I think that’s worthy of some thanks.”

It’s been more than a year since the day Williams did something in a shitty situation. Asked how much that something has changed his life, he answered, “My family would say, ‘A lot,’” he said. “It reactivated stuff that was pretty well settled out.” 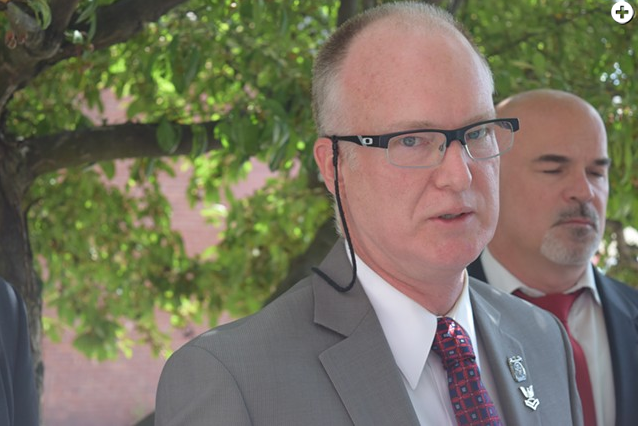 By which he means military stuff. When he’s dressed in a suit and tie and wearing glasses as state’s attorney, Williams looks like a bookish lawyer. But wearing a thin, fabric beanie and the beginnings of a gray beard as he sat talking on the outdoor patio of La Brioche Bakery & Café in Montpelier this week, he looked more like the tough Navy veteran who is still processing what he’s been through.

Williams spent eight years in the Navy during the 1980s, serving abroad in Beirut and Central America. He didn’t go into detail about his combat experience. “There was stuff that went on. Nothing remotely like what guys today are going through.”

In Barre, Williams still regularly sees some of the people most intimately affected by the shootings. His office is just down the street from the scene. He frequently encounters new threats to state workers related to child-custody cases. For a while, an image of Sobel’s face would appear before him, “like a 35mm slide of Lara would just sit here.”

Williams, because he was a witness, is not prosecuting the murder case against Herring. That’s being handled instead by the state Attorney General’s Office. A status conference is scheduled for early December to discuss the scheduling of a competency hearing in the case, said Assistant Attorney General John Treadwell. He anticipates a two-day court hearing to determine whether Herring is mentally competent to stand trial.

Sobel’s death has not changed the way Williams prosecutes other crimes, he said. He has always seen cases not as black and white.

“I don’t hate Jody. I think she’d been a lost soul for quite a while,” he said, quickly adding: “I don’t want to in any way excuse in any way, shape or form what she did. Life really is more complex than we want it to be in the court system.”