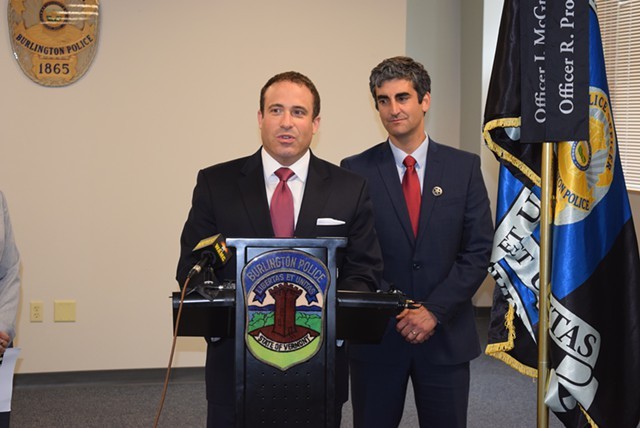 Burlington could be designated a “sanctuary city” before president-elect Donald Trump even takes office.

The Burlington City Council hopes to craft and present a resolution by the end of December, according to council President Jane Knodell. The designation would mean municipal employees, including police, would not ask people about their immigration status during calls for service. It also means city employees wouldn’t round up undocumented immigrants at the behest of the federal government.

The policy allows undocumented immigrants to contact law enforcement if they’ve been a victim of a crime, witnessed a crime or otherwise need police services — without fearing reprisal, according to police Chief Brandon del Pozo.
Queen City police have long carried out such a practice, del Pozo said.

“We want to continue the relationship of trust we’ve built with the people who need our protection by locally emphasizing crime fighting over immigration issues,” del Pozo said in a statement Friday.

It’s not the first time a city official has floated the idea. Former mayor Bob Kiss proposed turning Burlington into a sanctuary city in 2006, but the push fizzled.

There may be more urgency — and symbolism — this time around. Trump has called for stripping federal funding from sanctuary cities, which he blamed for “so many needless deaths.”

“Cities that refuse to cooperate with federal authorities will not receive taxpayer dollars, and we will work with Congress to pass legislation to protect those jurisdictions that do assist federal authorities,” he told crowds on the campaign trail in August, according to CNN.

Mayor Miro Weinberger announced the plans for the designation during an interview Thursday with Vermont Public Radio.

“Our practices have been consistent with cities that consider themselves sanctuary cities and what I think it is time for now, given the uncertainty in the community, is for us to take that step and to formalize our practices into policy,” he told VPR.

Weinberger promised to work on the resolution with council members. He informed them of his plan in an email sent 30 minutes before the interview aired.

“We have spoken with President Knodell, and will be establishing a way to carry out this work over the next several weeks with the goal of having a resolution before the council soon,” Katie Vane, the mayor’s communications and projects coordinator, wrote in the message.

In a statement released Friday, Weinberger said the policy allows city workers “to do our job right and protect public safety, and to ensure that Burlington is a welcoming and inclusive place for people of all backgrounds and identities.”

Friday, Knodell said she embraces the proposal. The council will likely hold a work session or create an ad hoc committee to lay out the details of the resolution so councilors know the ramifications of the designation.

Knodell said the mayor felt that it is “important to send a signal to the members of our community that Burlington is not going to change, that they’re going to enjoy the same access to city services they have now — that we’re not really with the Trump program, if you will.”

Chicago, Los Angeles, New York, Philadelphia and Boston are examples of sanctuary cities, which the president-elect has promised to punish as he carries out his hardline policies on immigration.

It’s unclear at this point what federal funding Trump would or could withhold from the city.

But just this week, the Burlington board of finance accepted a $625,000 grant from the U.S. Department of Justice to fund five new police officers during the next three years.

“As he lays out that policy, he will have carrots and sticks for municipalities that do and don’t cooperate,” Knodell said. “I think we expect that. That’s kind of an area where we’ll really have to dig in and figure out what we do in different scenarios.”

Councilor Sara Giannoni expects she’ll support the resolution but wants to know more of the details. She predicted the city will have to step in and protect its residents in new ways if Trump enacts policies that contradict the Burlington ethos.

Migrant Justice, a human rights organization that lobbies for undocumented farm workers, is based in Burlington, though much of its clientele lives and works in rural areas outside the city. Campaign coordinator Brendan O’Neill said the group is thrilled by the news and hopes the city follows through. He said Migrant Justice has offered to help guide and support city officials during the process.

There’s a big difference between promises and action, O’Neill said, so he hopes the city includes strong, concrete language when crafting the resolution.

He said: “We look forward to working with the mayor and the police department to create a legal framework to be prepared for the unknown of the Trump presidency — who is clearly a bigot, who has white nationalists in his office. It’s an unprecedented moment.”

“It’s a scary time for people,” O’Neill added. “This is an important statement and it gives our members hope.”

Winooski appears to be on a similar track. Mayor Seth Leonard, according to the city council’s agenda for Monday, is scheduled to present on a “resolution authorizing policy development to make Winooski a sanctuary city.” Leonard could not immediately be reached for comment.