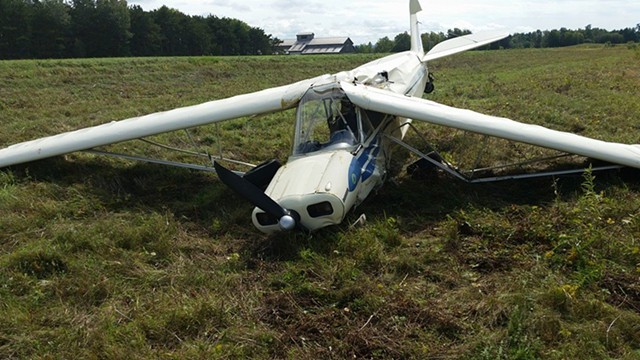 The small-plane crash on Savage Island involving two Vermont National Guard airmen in September happened as the pilot practiced an emergency landing, according to a report from the National Transportation Safety Board.

He idled the plane at an altitude of 450 feet to “simulate an engine failure,” but then experienced aerodynamic stall about 15 to 20 feet above the ground before hitting the private island “nose low and left wing down,” the NTSB’s “factual report” recounts. The pilot reported “that he misjudged the wind speed and did not realize he was completing the simulated training maneuver with a tailwind.”

The pilot and a passenger in the back seat were uninjured. The report indicates neither occupant was administered a toxicology test. The Piper PA-11 plane, built in 1947, had substantial damage.

The NTSB report describes September 19 as a clear day. The plane departed from the Allenholm Airport in South Hero around 11:20 a.m. before crashing on Savage Island, east of Grand Isle, around noon.

John Rahill, a lieutenant colonel and F-16 pilot/instructor in the Vermont Air National Guard, owns the plane. The pilot isn’t identified in the report but several sources said it was Rahill who crashed. The report says the pilot, age 50, possesses a certificate for “airline transport, instructor, military” with 8,346 hours of flight time.

Rahill did not respond to repeated requests for comment.

The factual report is one in a series that will be issued by the NTSB, spokesman Eric Weiss told Seven Days. It’s followed by an “analysis phase, which will culminate in a finding of probable cause,” he said.

The factual report lays out what happened while “probable cause tells you why it happened,” Weiss explained. “We can make recommendations to any entity as a way to prevent these sorts of accidents from happening again.” 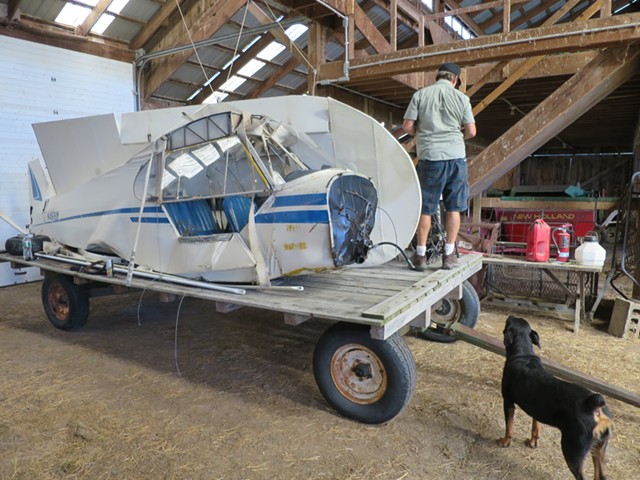 At the time of the incident, Grand Isle County Sheriff Ray Allen told Seven Days that no one reported the crash to local authorities until six hours after it occurred. Unaware the wreck was hours old and that both men had left the scene, Allen said, he called out a full rescue operation.

Allen reached the site and was unhappy to find out that the pilot and his passenger had left. Reached Wednesday, Allen said he wanted to see what action the feds would take before deciding whether he would attempt to have Rahill pay for the unneeded emergency response.

“It is a possibility,” said Allen. “I have to do some research and work with state aviation on what my authority would be on that and what laws Vermont has that would be applicable.”

The Federal Aviation Administration is also investigating the incident and looks into “any violation of FAA regulations that may have taken place in an accident,” a spokeswoman said.

“The FAA has the regulatory authority to suspend or revoke pilot licenses and levy civil penalties,” according to the agency. It issues a report separate from the NTSB’s.

The Vermont National Guard declined to comment on any specifics surrounding the case.

“This is a civilian matter being handled by civilian authorities at this time,” said Capt. Dyana Allen, the guard’s public affairs officer. “And we wouldn’t want to be looking into the matter until their investigation has completely closed.”

Members of the Riehle family own the island. Dunlap Riehle oversees the airstrip and said that several small planes use the “north practice area” airspace around the 207-acre island.

He said the person who called in the plane crash was a friend of his flying overhead who saw the wreckage and worried Riehle was hurt.

“In hindsight, some communication would have gone a long way,” Riehle said. “But no one was injured; there was no equipment failure and that’s the circumstance you normally contact the FAA. None of those occurred.”

Riehle said he’s friendly with Rahill, and helped disassemble and store the wrecked plane after the crash. A few days later, they loaded the plane onto a barge to be taken for repairs.

Riehle does not expect Rahill to face punishment for the crash and said he was relieved no one was hurt.

“There’s an expression that goes, ‘Any landing you walk away from is a good landing,’” Riehle said.