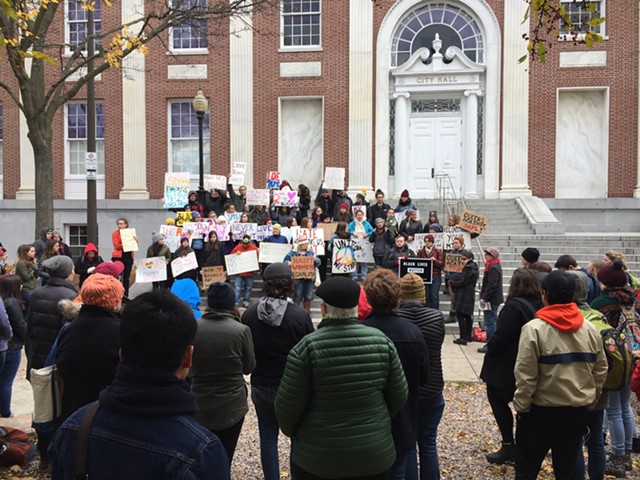 Once Donald Trump becomes president, Chris Hudson said, she’ll have a target on her back.

The 34-year-old artist is a transgender woman and a lesbian small-business owner. She lives in rural Isle La Motte, where Trump tallied (four) more votes than Democrat Hillary Clinton. Oh, and her wife, Shelly Hail, is a permanent resident from Israel whose visa is up for review next year.

Trump, in other words, stands opposed to her sexuality and lifestyle in more ways than one, she said.

On Friday, Hudson stood in front of a crowd in Burlington’s City Hall Park and led a diverse group of some 200 people in a raucous chant of “Love Trumps Hate!”

“You have to stand up, you have to act,” she said. “If you’re afraid, they’ve already won. Don’t be afraid; we’re all here together.”

The anti-Trump rally brought together people from several of the groups that the president-elect managed to malign during his campaign: women, minorities, immigrants, the LGBTQ community, the disabled and sex assault survivors. All spoke of the horrors they fear they will face under such an intolerant leader of the free world. One woman quoted Desmond Tutu: “If you are neutral in situations of injustice, you have chosen the side of the oppressor.”

Some young women stood in solidarity in the blustery cold with “Nasty Woman” written on their cheeks, a reference to a comment Trump directed toward Clinton during the third presidential debate.

Several people hoisted signs bearing slogans such as “Love Trumps Hate,” “I’m Still With Her,” “Queers Against Trump,” “Black Lives Matter,” and “He’s Not My President.”

Middlebury College first-year student Cora Kircher carried a sign that read “Pussies Grab Back,” a cheeky nod to Trump’s infamous “grab them by the pussy” comment captured on a hot mic in 2005.

Kircher, 18, told Seven Days she felt she needed to make a stand against the misogyny and xenophobia — “among all the other things,” she added — espoused by the man set to become the 45th president of the United States. One of her main concerns was the “normalization of rape” after the election of a man accused by several women of sexual assault.

David Schein, a local artist and self-described veteran of the 1960s tumult in Berkeley, Calif., surrounding the Vietnam War and other social issues, urged students and young activists to get involved in national politics. He encouraged attendees to “get your bail money together” and to head to Washington, D.C., for a “Million Women March” scheduled for January 21 — the day after Trump’s inauguration.

“We live in such a bubble here and it’s great for people to get involved in national politics,” Schein told Seven Days. “Whatever happens in the rest of America is very different than here.”

Jeanette Bacevius, a mental health counselor at the Howard Center, led the crowd in a singalong to lift spirits.

“I’m so proud of our community,” she said to cheers. “We can do this together and we are not alone. I commit to continue standing up for the rights of others.”