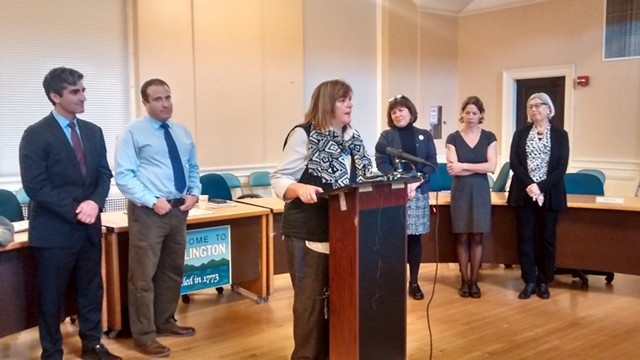 Speaking to the press at Burlington City Hall, Weinberger announced the hiring of opioid policy coordinator Jackie Corbally, who will fill a new position working as a public health adviser for the Burlington Police Department and managing opiate-response efforts across departments and organizations.

The announcement followed a gathering of more than 40 government officials, nonprofit leaders and medical workers in the first meeting of a new initiative called CommunityStat. The model will emphasize data collection, coordinated approach and rapid follow-up. Weinberger called the initiative a "a new front in the city's response to the opiate challenge that is gripping the city."

Later, Seven Days met with Corbally in her office in the Burlington Police Department to discuss the details and challenges of her work. The conversation was edited for clarity and brevity.

Seven Days: How does your background qualify you for this position?
Jackie Corbally: First and foremost, I'm a social worker. And I've been a social worker for 30 years. Social work is about community change and it's about teaming and it's about working with various partners. I've worked at Spectrum. I've worked at the Baird Center. I've done internships with the state hospital; I've worked for Women Helping Battered Women. I feel like my career has been really varied. I worked for the Health Department's Alcohol and Drug Abuse Program for 10 years. [Most recently] I went back and was a clinician on the ground because I had to get back to my roots and have some really real conversations with the people who were in the throes of addiction.

SD: What are the initial steps you'll take as opioid policy coordinator?
JC: I think we started today, by bringing community partners around the table [and] beginning to have some really hard and honest conversation about what we're doing well and what we're not doing well and recognizing where the barriers are and how we need to knock those down. Secondarily, working with the police department ... providing education and support to the department.

SD: What is the data you'll be collecting and how do you plan to apply that to your work?
JC: When we demonstrated the data we had today ... it was clear there were holes. What we're hoping is that the data will show where we're having success in the city and where we're not. Are people able to get housing in a timely manner? Are people able to get treatment? One thing we know about addiction is, when the person's ready to make the life change, you have got to be there to offer the services. If you delay, there's the potential you're going to lose them.

When we do this, when we get to a place where we're operating at full capacity, this will be a really vibrant place where the community can access treatment, can access the prevention that they need. If we're doing it the right way, there won't be any silos. The systems will be talking to each other as one and be able to augment the services in a timely fashion.

SD: How will you determine your metrics for success?
JC: We are just deciding that. Today was the first conversation with the community partners around what are the data elements that they're collecting in their agencies; where are the gaps. Now we're taking it back and doing a debrief next week and then we'll make a measure of that.

SD: Holistic opiate treatment involves a lot of different components including health care, housing, et cetera. What impact do you see this initiative having on the community as a whole or in other areas long-term?
JC: I think first and foremost, we look at this disease as a chronic health disease. Meaning that you just don't go and get treatment for six weeks and then you're better. Another thing is to recognize that this disease is based in shame and humiliation. Having a level of understanding that you don't choose this.

When we talk about opiate addiction, it's more than just someone committing crime, or somebody losing their children. It's a chronic health disease. It changes the brain structure, and it takes time when somebody engages in recovery to get to a place where they're fully functioning.

SD: What have you seen as the biggest gap in the cooperation or coordination in the programs across Burlington?
JC: The system is really stretched right now. It really is, when you have a 50-person caseload, and you have a person who has done criminal behavior ... You've also got someone who's suicidal and kids who are being taken away. These folks are just really overwhelmed. Part of it is just how can we alleviate that burden.

We need to norm the data. I can promise you that the people in the community are like, 'I'm dealing with people right now, I don't have time for that.' What we're trying to do ... is to shift the lens. Data can be a fantastic tool, but you've got to invest in it.