Sanders Breaks His Silence on Trump's Election | Off Message 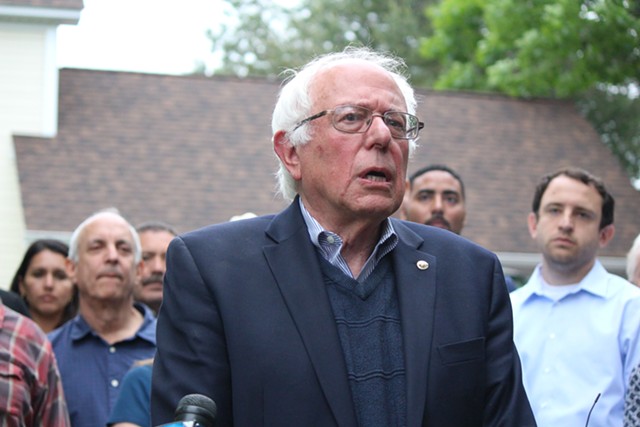 He'll give Trump a chance.

The 75-year-old senator, who backed Clinton after losing a long-fought Democratic presidential primary, promised to play nice if Trump "is serious about pursuing policies that improve the lives of working families in this country."

Donald Trump tapped into the anger of a declining middle class that is sick and tired of establishment economics, establishment politics and the establishment media. People are tired of working longer hours for lower wages, of seeing decent paying jobs go to China and other low-wage countries, of billionaires not paying any federal income taxes and of not being able to afford a college education for their kids — all while the very rich become much richer.

To the degree that Mr. Trump is serious about pursuing policies that improve the lives of working families in this country, I and other progressives are prepared to work with him. To the degree that he pursues racist, sexist, xenophobic and anti-environment policies, we will vigorously oppose him.

Sanders cast his ballot Tuesday morning at his polling place in Burlington's New North End. He wasn't heard from again until his office released a statement reacting to the results around 6:30 p.m. Wednesday.

Even though Sanders didn't appear on the presidential ballot, his ultra-blue home state still found a way to honor him: Some 17,590 Vermont voters, and counting, wrote in his name. That was approximately 5.5 percent of the statewide tally — more than the total for Libertarian Gary Johnson.

Updated at 4:05 p.m. November 10, 2016, to reflect the updated tally of write-in votes for Sanders. Results still unofficial. (and not all write-in ballots have been counted.)