A grinning Scott took the stage around 11:30 p.m. at a Vermont Republican Party gathering at the Sheraton Burlington Hotel in South Burlington.

“I can’t believe we’re here tonight,” Scott told a ballroom full of jubilant supporters — his wife, mother and two daughters by his side. “You know, 20 years ago I didn’t have a political bone in my body. To say this blue-collar kid from Barre never expected this to happen is an understatement.”

“She thanked me for the campaign we ran and wished me the best as the next governor of Vermont,” the governor-elect said. 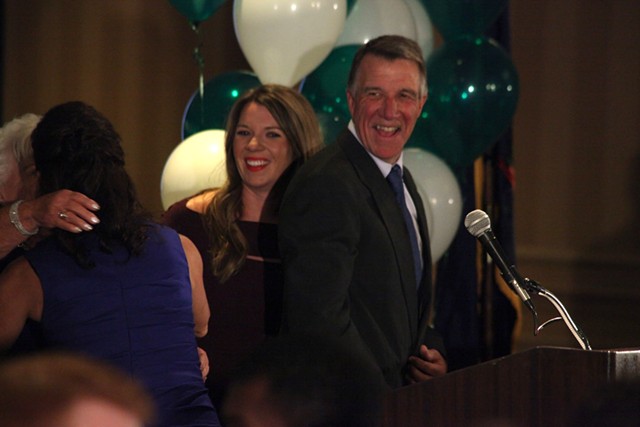 Scott, a 58-year-old construction executive from Berlin, has served as lieutenant governor for the past six years and spent the decade before that in the state Senate. By early Wednesday morning, he was leading Minter 52.2 percent to 43.6 percent with the vast majority of precincts reporting. Liberty Union nominee Bill “Spaceman” Lee took 2.8 percent of the vote.

He did it despite being a Republican in what is widely considered one of the most liberal states on the country. Even as governor, Scott will remain the only Republican statewide official in Vermont, as he has been for the last six years. He will face a state House and Senate with large Democratic majorities.

Scott pledged to work with all parties. “In my administration, there will be room for everyone,” he said. “Republicans, Democrats, Progressives, independents and no label at all.”

“There is no doubt the challenges are real, but the opportunities are also great, and together we’re going to move our state forward for these Vermonters and all Vermonters,” he said.

At the Sheraton ballroom were those who support and those who loathe Republican presidential candidate Donald Trump, whom Scott condemned early in his campaign. Reaction to the presidential race throughout the night was barely audible in the room. Most attendees were focused on Scott’s win. 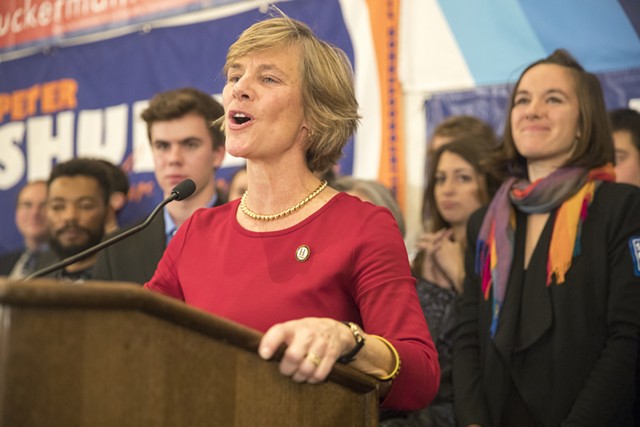 Conceding the race at a Democratic Party event at the Hilton Burlington, Minter attempted to remain upbeat, dancing her way to the stage, surrounded by her family.

“It’s been a long night and it’s been an amazing journey,” she said, pledging to continue fighting for her policy priorities. “Folks, nothing ends tonight. Every ending is a new beginning.”

After thanking her supporters, staff and family, she said, “I feel so much gratitude and appreciation. No regrets. Total pride. Onward.”

Republicans and Democrats alike had long viewed the gubernatorial race as highly competitive and too close to call. Scott said Tuesday that even he questioned whether he would prevail.

After declaring victory, Scott quickly shifted to his new role as governor-elect, warning his campaign staff that he expected them to get right to work Wednesday. He said he planned to hold an afternoon press conference Wednesday in Montpelier to announce the framework of his transition team.

The next governor will have just eight weeks to put together a staff, prepare for his January inauguration and write a new state budget.

Scott said he understands he faces a difficult job, including the possibility that House Democrats will hold a veto-proof majority, following the loss of several Republican seats. “I’ve reached across the aisle before and I expect they’ll reach back,” he said.

The Republican’s victory continues an unbroken trend since 1962 of Vermont voters shifting control of the governor’s office to the party out of power whenever the seat opens up. As he entered the hotel ballroom to make his victory speech Tuesday night, he hugged former governor Jim Douglas, a Republican who preceded Shumlin.

Campaign adviser Jason Gibbs said Scott pulled off his win by earning the support of Vermonters who have not traditionally voted. By 8 p.m. Tuesday, he said, the campaign had realized it had won enough votes to prevail.

“We overperformed targets by a healthy margin. We won in Waterbury,” Gibbs said, referring to Minter’s hometown. “We introduced tens of thousands of voters who wouldn’t otherwise have joined this process.”

Scott’s wife, Diana McTeague Scott, mingled with supporters after her husband’s victory speech. A registered nurse, she said she knew what it was like to be the spouse of the relatively under-the-radar lieutenant governor. But what did she envision for the first lady of Vermont?

A moderate Republican, Scott focused his campaign on improving Vermont’s economy and making the state more affordable. He advocated fiscal prudence and promised to rein in state spending.

Minter, meanwhile, argued that Vermont should not “press the pause button” on its progressive social programs. She promised free college tuition at the state’s community colleges, a higher minimum wage and a focus on renewable energy.

But Minter apparently could not overcome voters’ negative perceptions of the Shumlin administration, in which she served. The Republican Governors Association, which went to bat for Scott, invested $3 million in the race, running negative advertisements referring to Shumlin as “Minter’s mentor.” 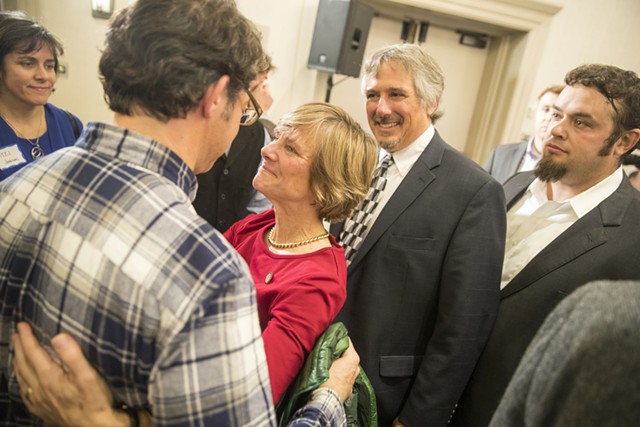 The Democrat did have the full-throated support of the Democratic establishment — including President Barack Obama, who taped ads for her; Vice President Joe Biden, who appeared with her in Burlington; and Sen. Bernie Sanders (I-Vt.), who campaigned with her across the state.

But their powers combined could not push Minter over the top.

“It was daunting. They had a lot of star power,” Scott said Tuesday night. “I had a lot of faith in Vermonters.”

Minter also had the support of outside interest groups, which spent a combined $2.4 million on her behalf. In the final weeks of the race, they launched a media blitz against Scott, accusing him of opposing abortion rights. The Republican has long called himself pro-choice, but he favors some restrictions on abortion.

According to Gibbs, the Scott adviser, the Democratic tactic backfired.