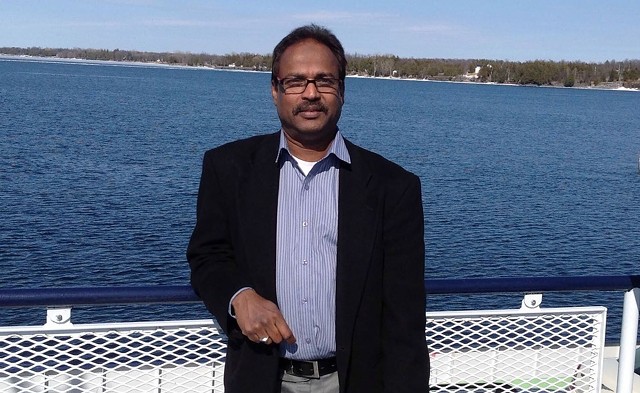 On Wednesday morning at the Association of Africans Living in Vermont offices, Alisha Laramee sorted clothes that had been donated to the nonprofit. The Kentucky native, who oversees AALV's New Farms for New Americans program, said she was too depressed to work.

Her colleagues looked despondent and spoke in resigned and hushed tones. No one wanted to be interviewed. Rita Neopaney, a Bhutanese woman who on Tuesday was jubilant when describing her first voting experience to Seven Days, stopped to say only that AALV clients had showed up at the office to voice their confusion and fear after Donald Trump was elected president. The nonprofit provides social services, such as case management and workforce development, to refugees, immigrants and asylum seekers.

"I would say that everyone is sad and worried about the future," said Jacob Bogre, AALV's executive director, adding, "We tried to reassure the staff and some of the clients."

"Racism, [that's] what it is," said Thato Ratsebe, the nonprofit's health educator, public relations and direct staff manager. "I'm worried about how my clients feel. These people have lived the refugee experience."

When the media started talking about long lines in rural areas, Bogre felt sad. "Not because people came out to vote. But because [Trump] was able to tap into people's anger," Bogre said. "When people are afraid, they would always bring out the worst in themselves."

Despite his palpable disappointment, Bogre was optimistic. Once the dust settles, common sense will prevail, he said. Instead of blaming refugees and immigrants for taking away jobs from Americans, Bogre said, "We have to retrain our workforce so that we can meet the demand of our evolving world."

Meanwhile, the U.S. Committee for Refugees and Immigrants issued a statement Wednesday urging the president-elect to "continue the tradition of the best of American values including equal protection and respect for every member of society."

Lavinia Limón, USCRI president and chief executive officer, said: "Throughout our history, refugees and immigrants have been welcomed to America by presidents from both parties in war and in peace and the current global refugee crisis is no time to shrink from this leadership."

But when Farhad Khan, the president of the Islamic Society of Vermont, woke up Wednesday morning, he felt "scared" for Syrian refugees who are coming to Vermont. "I don't know what's going to happen to them," Khan said.

He also faced a heartbreaking question from his 8-year-old daughter: "Dad, now what?"

"I gave her a hug and assured her that it's going to be OK," the Middlebury-based retailer said. "We've been through this before. It doesn't help [if we] panic," Khan said. He noted that Muslims faced backlash following the September 11 attacks, as well as those in San Bernardino, Calif., and Paris, France.

Although "people are nice around here," Khan planned to email his congregation to advise them to be aware of their surroundings. In particular, women who wear headscarfs and men who sport a beard would be reminded to take precautions, he said.

But Khan said the local community has been very supportive, leaving messages of comfort on his and and the Islamic society's Facebook pages.

Connie Saeger-Proctor wrote, "It is an honor and privilege to call you a friend and colleague. May we always find a way towards peace and justice. I pray that all of God's people will find a way to live and love each other. Shalom, Peace, Shalem."

"It scares me not only as a Muslim, but a woman, as a human being," she said. "Wearing [a headscarf,] it's obvious what I am. How can you not feel you're being targeted?"

The Colchester resident said she feels safe in most parts of Vermont. But she would think twice about traveling out of state.