Doyle Defeated as Democrats Gain Seats in the Vermont Senate 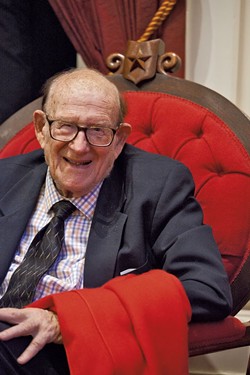 Republican governor-elect Phil Scott will face an even more Democratic Vermont Senate than the one he's come to know, according to preliminary results from Tuesday's elections.

Democrats and Progressives appeared to pick up two seats in the state's upper chamber, giving them 23 out of 30. But Republicans successfully fended off a challenge in Franklin County, where they were defending two seats.

The biggest shock of the night came in Washington County, where Sen. Bill Doyle (R-Washington) fell to former Democratic representative and sergeant-at-arms Francis Brooks. Doyle, 90, has served in the Senate since 1969. A political science professor at Johnson State College, he is known throughout Vermont for the annual "Doyle Poll" he administers every March on Town Meeting Day.

With all 20 of the county's precincts reporting early Wednesday, Brooks led Doyle 13,685 to 13,498 votes for the third seat in the district. Incumbent Sens. Ann Cummings (D-Washington) and Anthony Pollina (P/D-Washington) won the other two seats, with 17,008 and 15,207 votes, respectively.

Democrats and Progressives picked up a second seat Tuesday in Chittenden County, where Sen. Diane Snelling (R-Chittenden) recently retired. Filling her seat and another vacated by Progressive/Democratic lieutenant governor-elect David Zuckerman were Williston Selectboard member Debbie Ingram, a Democrat, and Rep. Chris Pearson (P-Burlington), who ran as a Democrat and Progressive.

In every other county, incumbents won reelection.