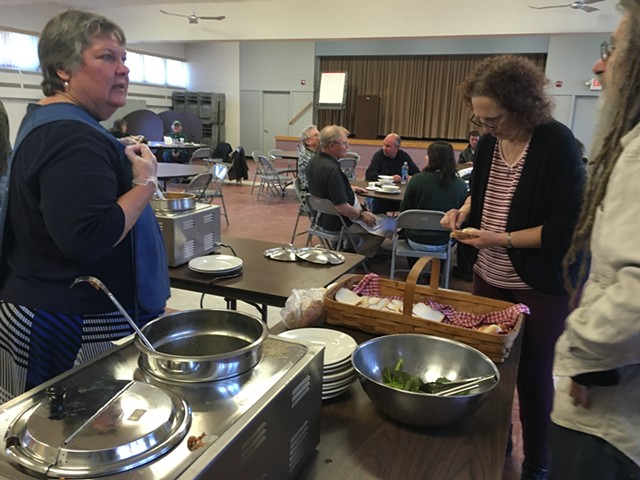 Bethany United Church of Christ in downtown Montpelier has hosted a free weekday lunch for more than a decade, opening its doors to a friendly mix of the homeless, working poor and people just seeking company. Tuesday, more than 100 people packed the church basement. Volunteers say that while they're not overwhelmed, they are concerned about how many people depend on their help.

As they noshed on egg salad sandwiches and carrot ginger soup just a few blocks from Montpelier's polling place, many of the regulars said they didn't think the presidential election, despite all the attention it has received, mattered much.

To spend a couple hours in the church basement was to be reminded that despite the omnipresent election hullabaloo, not everyone votes. Nationally, less than 60 percent of eligible voters participated in 2012.

"I know foreign policy is important, but it's hard to hear and think about abstract [issues] when you're worried about freezing to death, or your friend's tent is leaking," said Dawn Little, when asked about voting. She's a regular attendee who has toggled between homelessness and living in an apartment.
Jesse Palmer said he has struggled to find work since he was laid off from IBM in Essex during the 2008 financial crisis. He followed news of the campaign as best he could, he said.

"I'm scared of [Donald] Trump," Palmer said. "He's just doing it to look bigger than he is."

But Palmer didn't vote Tuesday. He lives in a tent in the woods, and said he wasn't sure he could even register.

Palmer sat at a table with an older man with a long brown beard and a Harley-Davidson baseball cap. The man identified himself as Cricket, and said he has been homeless off-and-on for years.

"It doesn't make a lick of difference," Cricket said of the election. "Waste of time. They're all crazy, just saying what they need to."

Others at the lunch were more enthusiastic about voting.

Allan McGregor has been coming to the free lunches at Bethany since he was laid off in January. After almost a year of watching his savings erode, he was finally hired just last week as an accountant at the New England Culinary Institute.

"I had $70 in my checking account and $1,000 in bills stacked on my counter," McGregor said. "I'm a Christian. I trusted the Lord to take care of me. But he cut it close this time."

McGregor voted for Trump, saying he supported the candidate's hard-line position on immigration, and did not want Hillary Clinton to be able to nominate U.S. Supreme Court justices.

Allyssen Maghtane, who lives in an apartment in Montpelier and says she comes to the lunches as much for the social interaction as the free meals, voted for the first time Tuesday. She cast a ballot for Clinton, she said, because Trump "hates women."

No one interviewed thought their choice in president would do much of anything to improve their economic prospects.

"I don't think the economy will ever get better in Vermont," McGregor said. "There's no talk of creating jobs."

Maghtane recently applied for a job bagging groceries at the local Shaw's supermarket, but was told they weren't hiring. She doesn't think she will land a job any time soon, regardless of who wins.