"It was craze-balls," said Janet Stambolian, who was signing in voters at Edmunds Middle School as people flooded in after polls opened at 7 a.m. "You can quote me on that." Anecdotally, Stambolian noted high numbers of new voters and immigrants, she said.

Voters across the city described a sense of both impending relief and doom, a bewildering climax after 14 months of election fatigue and media barrage.

"I'm so frickin' nervous about this — on so many levels," said Dave Oppenheimer, campaign manager for Partnership for Burlington's Future. Oppenheimer stood outside the Ward 2 location, holding a "vote yes" sign for city ballot initiatives.

"No one standing at these polls has slept in like five days. I just want it to be over — but I want to win."

The Burlington clerk's office had also seen high early voting totals. The city sent out 5,889 general election absentee ballots — about 20 percent more than were requested in the 2012 presidential election, according to Hannah Cormier, a customer representative at the office.

By 8:30 a.m., a line snaked out the door of the Sustainability Academy at Lawrence Barnes, the Ward 3 polling place. Acting inspector of election Damon Lane speculated that the turnout might surpass that of the 2008 presidential election.

But, he added, the vibe is vastly different. 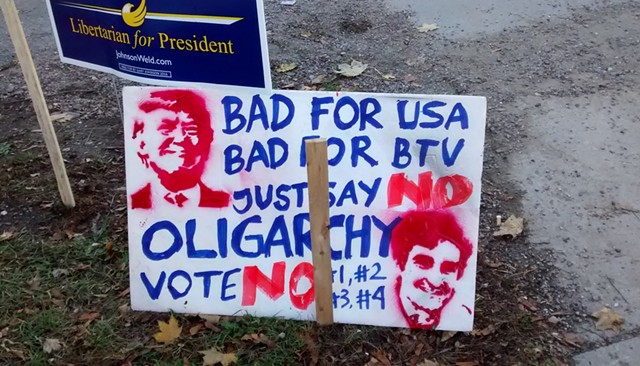 First-time voter Rita Neopaney was at the Robert Miller Community & Recreation Center at 8:15 a.m. with a group of friends and relatives. Neopaney, who works as an outreach worker and program specialist at the Association of Africans Living in Vermont, said that it was a "big day" for her.

Neopaney was among the tens of thousands of Bhutanese nationals of ethnic Nepali descent who were stripped of their citizenship in the early 1990s. They lived in refugee camps in Nepal for nearly two decades before resettlement to the U.S. began in 2008. Neopaney and her family moved to New York City in 2008 before relocating to Vermont two years later. The Bhutanese woman gained U.S. citizenship in 2014.

Neopaney noted that many Bhutanese refugees in Vermont would be voting for the first time this year. She said some of her octogenarian relatives chose to vote early.

After she voted, Neopaney helped to explain to those in her entourage how to mark the ballot. That took 20 minutes, she said. They are illiterate and needed her to read out the candidates' names. Only the presidential candidates are familiar to her relatives and friends. Some asked her who they should vote for. "[I told them,] put whatever you want," Neopaney said. Another question they asked: "Is he or she a Democrat or Republican?"

Later that morning, Neopaney accompanied her 61-year-old father to cast his vote at Colchester High School. 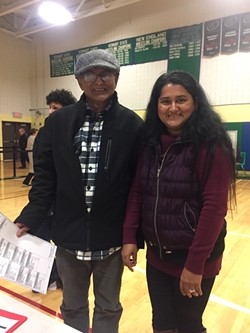 For Neopaney, it doesn't matter if the candidates she supports win or lose. "Being a citizen, free to vote. I love that," she said.

At other polling places, voters seemed to heave a collective sigh of relief as they exited.

"The silence will be very welcoming tomorrow," Rep. Joey Donovan (D-Burlington) said as she perused the bake sale after casting her vote at Edmunds.

Election officials and town clerks will begin to tally the results when the polls close at 7 p.m.