Burlington voters on Tuesday approved two ballot questions that will allow the proposed redevelopment of the Burlington Town Center mall to go forward.

About 54 percent voted in favor — compared to 46 percent against — of question 3, which asked residents to establish a downtown zoning change that will allow buildings up to 160 feet tall — about 14 stories. On question 4, which asked for $21.8 million in tax increment financing for street improvements in and around the district, 59 percent of voters said "yes" while 41 percent said "no."

Both were instrumental for developer Don Sinex, who wants to get started on a $250 million redevelopment of the mall. Sinex, who proposed the makeover two years ago, thanked his supporters for getting the measures passed.

"We have committed to build an extraordinary project to complement, strengthen, revitalize and reconnect Burlington," he said in a statement Tuesday evening. "I look forward to getting it done!"

Mayor Miro Weinberger also thanked city voters for approving the mall ballot items, and acknowledged that the debate has been contentious. But both critics and supporters share the same goal, the mayor said.

"Everyone in this debate has been working very hard to make the city of Burlington better," he said after the results came in.

The level of public engagement on the mall makeover has made it a much better project than it was two years ago, he added. The proposed renovation, coupled with the zoning changes and TIF-funded improvements will help make downtown Burlington a place of innovation and opportunity in the future, Weinberger said.

"I'm very excited that the people of Burlington by a decisive margin agree with that vision of the downtown and we're going to work very hard to see it realized," he said.

Leading up to the tally, opponents and supporters planted signs all over Burlington and continued to debate with vigor — and some say rancor — on social media.

Their exchanges were friendly and there was none of the "vitriol" that accompanied some of the debate leading up to Election Day, Freudenberger said. She supported questions three and four because she believes the mall redevelopment will bring affordable housing and revitalize Burlington.

"I think we have a great opportunity to promote positive change in our downtown," Freudenberger said. 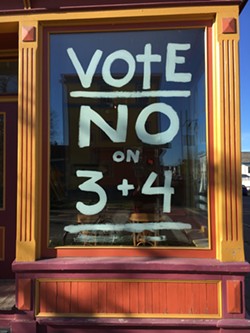 Ely doesn't like the mall proposal, or the accompanying zoning change that would expand building heights. Proponents have used scare tactics by comparing Burlington to struggling Flint, Mich., and overstating problems downtown, she said.

"The footprint of the existing mall is prime real estate," Ely said, and Burlington should wait for a better project.

Question No. 3 (passed): This item would increase allowable building heights from a maximum of about 105 feet to 160 feet on the Burlington Town Center parcel and several adjacent properties within a zoning overlay district.

Question No. 4 (passed): Request to approve a $21.8 million tax increment finance bond for streets, sidewalks, lighting and other infrastructure for the proposed makeover of the Burlington Town Center mall downtown. Much of the money would fund the reconnection of two streets that are now blocked by the mall. The new road connections would be built on St. Paul Street between Bank and Cherry, and on Pine Street, also between Bank and Cherry.

Question No. 5 (passed, 73 percent in favor): Charter change that would clarify rules around the operation of city parking garages and lots, and use of parking revenues. The change specifically clarifies that Burlington's growing revenue from on-street metered spots and parking space pay stations can be used for new parking facilities, parking garage maintenance, street and sidewalk repair, and traffic control.

Question No. 6 (passed by only 142 votes, 50.42 percent to 49.58 percent): An item asking if the Mayor of Burlington and the City Council should be advised to relocate the Burlington Bicycle Path to the
west side of the railroad tracks between College and King streets, even if that means utilizing the public trust doctrine. Bike path advocate Rick Sharp, co-owner of Burlington Segways, led the successful petition drive for this measure. Right now crossing over the railroad makes this section of the path hazardous, he said. But shifting even the relatively short section could be expensive and tricky as part of the land where it would go is privately owned.

In other news, city voters did not elect Ward 7 school board member David Kirk, a Republican, to be a justice of the peace. Kirk apologized last month for Facebook posts that some residents found belittling and racially insensitive, and some have called for him to resign.