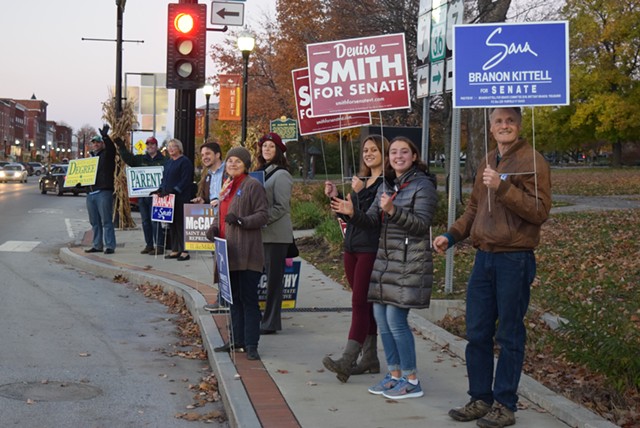 As he gassed up his white Nissan Versa at the Maplefield’s convenience store in St. Albans on Monday, Bob Hughes recounted how he confidently cast his vote for president.

“I voted for Hillary,” the Richford man said of backing Democratic presidential candidate Hillary Clinton. Republican Donald Trump worries him, he said, as does what he described as the Tea Party’s hold on national government.

When it comes to state politics, however, Hughes was less sure. He voted early because it was more convenient but he said he “didn’t have a chance to study the Vermont people.” Instead, he turned to friends for advice before supporting Democrat Sue Minter for governor.

Minter is in what appears to be a very close race with Republican Lt. Gov. Phil Scott, the first time in six years Vermonters will pick a new governor as Democrat Peter Shumlin retires. It’s one of several state races on Vermonters’ 2016 ballot.

Hughes said he wasn’t sure for whom he voted in state legislative races. “Probably Democrats,” he said.

Hughes isn’t alone in focusing most of his attention on the national election, not state races. A long, contentious and frustrating presidential campaign has taken more than its share of the spotlight, leaving voters exhausted, frazzled and with little bandwidth to spare for local races.

At St. Albans City Hall on Monday afternoon, a woman was on her cellphone while filling out her election ballot in the hallway. “You say Phil Scott is good?” she said into the phone, loud enough to be heard from a distance. “I’ll go by what you say, because you know best.”

Jason L’Esperance, another St. Albans City voter, was more sure of most of his votes, though he also admitted that the presidential campaign had far overshadowed the Vermont races.

A Clinton voter, he said he has sparred with Trump-backing friends frequently. L’Esperance is the rare voter who relished the debate, much as he likes the back-and-forth with fans of any NFL football team other than his New England Patriots.

Others are more traumatized by the tenor of the 2016 election. Outside Walmart in St. Albans, an elderly couple emerged from the store with a full shopping cart. How are they feeling about the election?

“Oh, no,” the woman said, dismissing the question.

He was willing to talk, but as he started to, she called to him. “You’re holding me up.”

“They’re tired of it all,” Democratic Franklin County Senate candidate Sara Kittell, of Fairfield, said Monday. “Now they don’t even want to talk.”

“I think the voters are anxious for Election Day,” said one of her Republican rivals, Rep. Carolyn Branagan, of Georgia.

Sen. Dustin Degree (R-Franklin), who is competing with Kittell, Branagan and Democrat Denise Smith for the county’s two Senate seats, said he thinks voters separate national and local politics, but it takes persistent campaigning to get through.

The Franklin County race is one of the key battlegrounds in the state Senate. Standing roadside, waving at voters a day before the election will be decided, the candidates all said they felt like they’d done as much as they could to reach voters.

The conversation turned to numbers, and how many votes it will take to win.

Mike McCarthy, a Democratic candidate for a House seat representing St. Albans, said if Minter wins at least 45 percent of the vote in Franklin County, Democratic Senate candidates Kittell and Smith will do well.

As the sky turned dark and the temperature dropped, the recent end of daylight saving time made the afternoon commute honk-and-wave a greater challenge.

Branagan turned to Kittell. “Are you tired, Sara?” she asked.