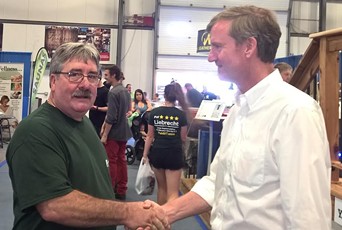 At the beginning of the week, the Republican minority leader of the Vermont House sought to distance himself from incendiary comments made by a series of his party's legislative candidates on social media.

"I've said over and over with any of these incidents that have come up that I don't condone those types of statements. There is no place in public office for hateful or incendiary discourse," Rep. Don Turner (R-Milton) said in an interview Monday. "These candidates, when they make statements, they are on their own and the voters will decide."

Turner's comments came before it emerged Wednesday that a third Chittenden County Republican House candidate faced questions about his online activity. As WCAX-TV first reported, Colchester candidate Patrick Liebrecht was charged in August for allegedly sharing nude photos of an ex-girlfriend online. Liebrecht, who denies the charges, told Seven Days he thinks it's no coincidence that their revelation came just six days before voters go to the polls.

"Somebody's putting a political hit on me, as far as I can tell," he said.

According to Liebrecht, who is running in a four-way race in a two-member House district, he chose not to tell the Vermont Republican Party about the allegation after he was cited last summer.

"I didn't say anything for a simple reason: I figured the case would be dismissed," he said.

"There is no room in the Vermont Republican Party for anyone who engages in this type of conduct," Bartley said.

While Liebrecht is the only candidate to be charged with a crime, at least two others have drawn scrutiny for their social media posts:

The trouble hasn't been limited to House candidates:

Vermont Republican Party leaders have also faced scrutiny for their defense of their presidential nominee, Donald Trump, since a 2005 video emerged of the reality television star appearing to brag about sexual assault:

And then, of course, there's the case of Sen. Norm McAllister (R-Franklin), who was charged 18 months ago with sexual assault. Several of the counts were dropped last June, but McAllister awaits trial on other charges. Even after his suspension from the Vermont Senate last January, McAllister chose to run for reelection, but he was defeated in the August primary.

Referring to the allegations against Liebrecht, the Colchester candidate, Bartley argued, "Such actions do not reflect the values of the Vermont Republican Party."

"What has come forward about the three Republican House candidates is disgusting and unacceptable," she said, noting that the comments came as Trump took over the GOP.

"The national Republican Party is now defined by Donald Trump and the insults and fear-mongering he promotes," Amestoy said. "If the Vermont GOP wants to show voters they are any different, they need to not just condemn the actions taken by these candidates, but push back on the tone permeating the national debate as well."