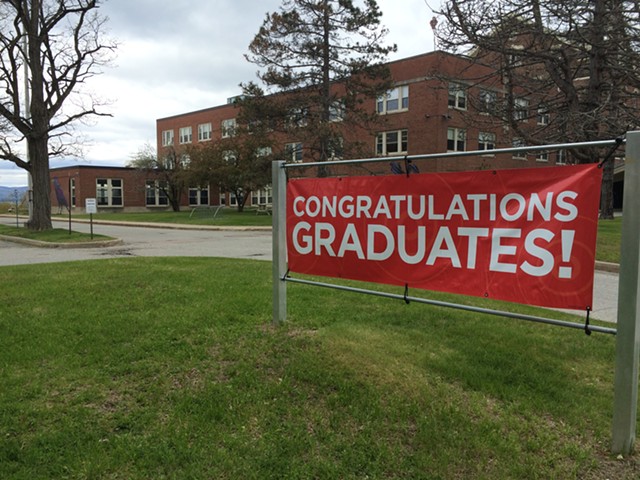 When Burlington College closed its doors for good in May, professors and administrators left behind fully furnished offices and classrooms. Now the items remaining at the institution are headed to the auction block.

A public auction is scheduled at the college for 10 a.m. December 7. Bidders can also participate online. People’s United Bank, which foreclosed on the college in the spring, contracted the Morrisville-based Thomas Hirchak Company to conduct the auction. All items — more than 600 lots — will be sold to the highest bidder.

For now, chairs and desks are piled in the vacated classrooms at the North Avenue campus. The library’s shelves are still crammed with books, and artwork leans against one wall. There’s a refrigerator, cameras and video equipment, flatscreen TVs, rugs, and a 3,600-square-foot tent, according to the auction website.

“In some offices, it looks like [professors] could be back tomorrow,” said Burlington College board chair Yves Bradley.

According to Bradley, all proceeds from the auction will go to People’s United Bank, the college’s lender.

“The bank’s interest is to get rid of everything at the college and pay off the creditors that they have,” said board member Tom Torti.

Torti could not estimate of the value of the equipment to be auctioned. Representatives from People’s United Bank did not immediately respond to requests for comment.

The auction marks another step in the dissolution of the college. In 2010, the college took on $10 million in debt to buy a 33-acre property. The college, which last year enrolled fewer than 100 students, folded in the face of crushing debt.

Meanwhile, the college is winding up its final administrative duties.

In July, with approval from the State Board of Education, the Agency of Education took control of all Burlington College student records and transcripts. The board allocated $18,000 in state funds to index and store the records until a permanent location is found, according to AOE spokesman Haley Dover. So far, Dover said in an email, the Agency has released transcripts to 31 students who requested them.

A handful of students are still enrolled at the college, completing work through the Williston-based apprenticeship program Vermont HITEC, said Torti. Burlington College will retain its accreditation through December 31 and will award diplomas or certificates to those students who finish the necessary coursework before the end of 2016, he added.

Around the same time, the three board members — Bradley, Torti, and Jane Knodell — will resign their positions and dissolve the board, the final act of college administration.